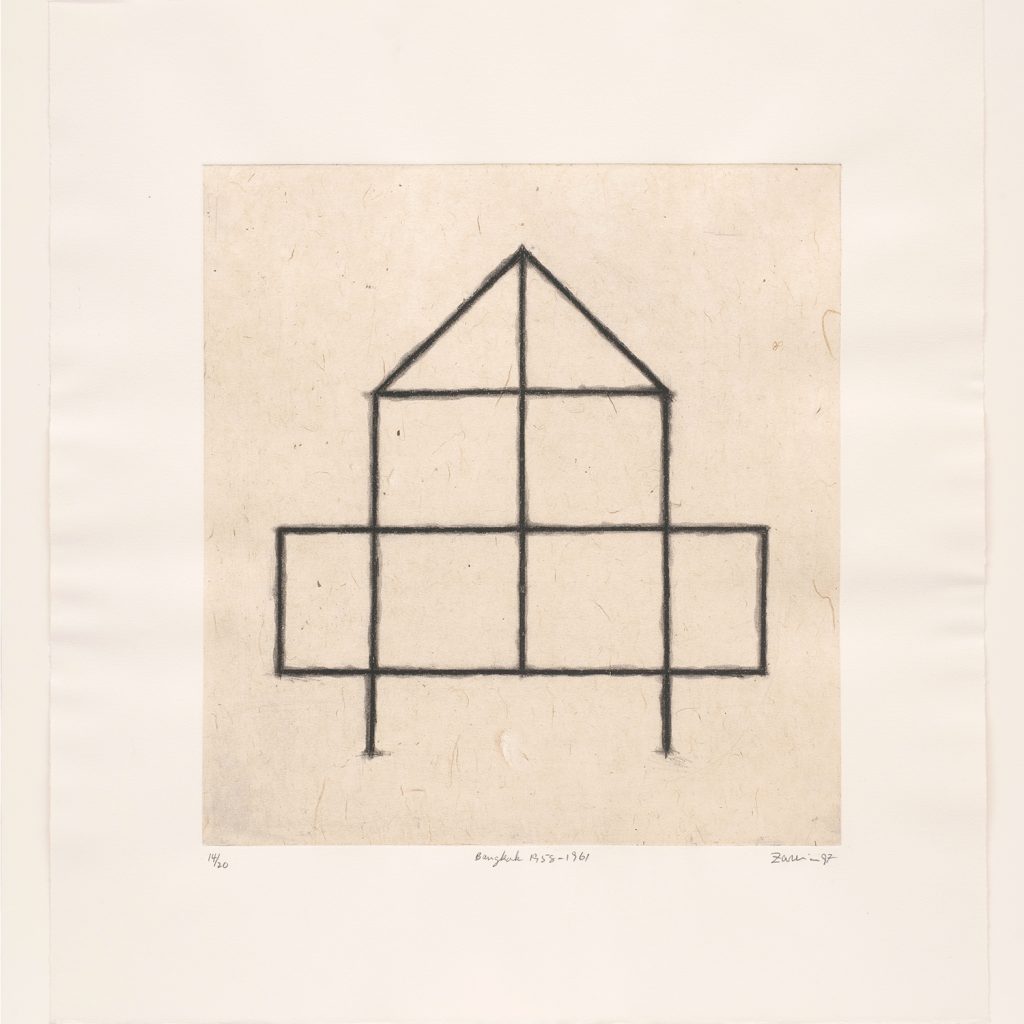 22 May The Map and the Territory: 100 Years of Collecting at UCLA

UCLA’s Centennial exhibition, The Map and the Territory: 100 Years of Collecting at UCLA, was meant to open at the Fowler on April 4. The museum has closed its galleries temporarily due to the COVID-19 epidemic, but—in this and upcoming posts—we want to share with you some of the objects included in the exhibition and stories behind them. When we reopen, you will be able to see these artworks with a sense of familiarity, and discover them further in person.

The Map and the Territory, organized by the Fowler with the Hammer Museum and UCLA Library, brings together some 200 objects from their holdings as well as UCLA’s diverse campus collections, and groups them into several thematic sections. For “Home and the Built Environment” we selected a series of artworks produced by people held in Japanese American internment camps during World War II and those touched by their predicament. On February 19, 1942, in response to fears of Japanese infiltration on the West Coast, President Franklin D. Roosevelt signed executive order 9066, authorizing the forced removal of all people of Japanese descent in California, Oregon, and Washington from their homes. More than 110,000 people, most of them American citizens, were incarcerated without trial and held for the duration of the war in hastily built camps in remote locations across the country. UCLA Library Special Collections preserves institutional records, works of art, and personal archives from this dark chapter in American history, some of them featured in The Map and the Territory. 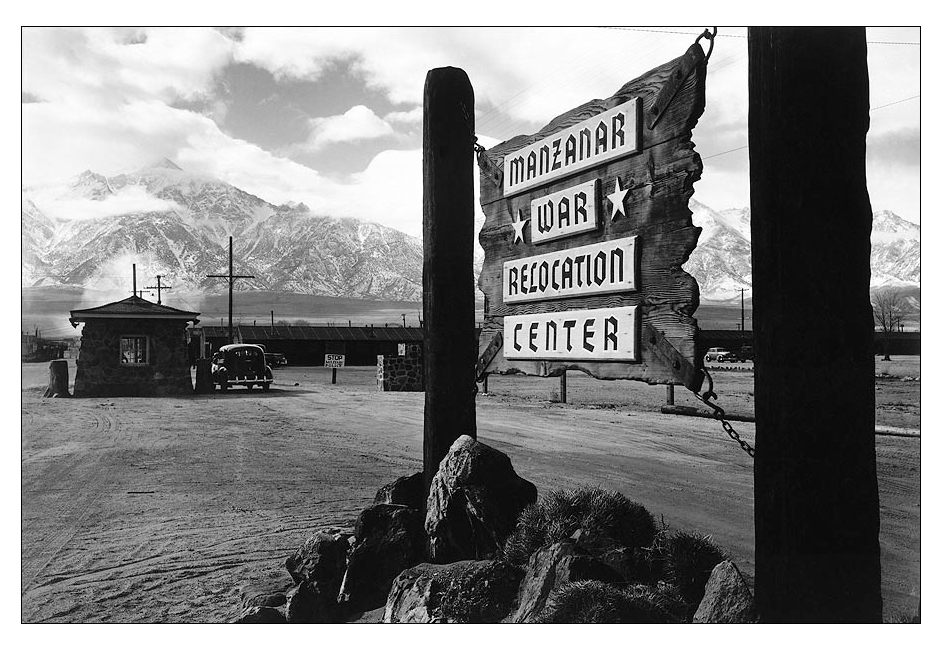 Ansel Adams—famous for his landscape photography and majestic depictions of Yosemite and the Sierra Nevada—turned 40 the day after Roosevelt’s Executive Order 9066. Eager to contribute to the war effort, Adams readily accepted the invitation of Ralph Merritt, the director of Manzanar War Relocation Center in California, to photograph the camp.

Adams’ Entrance to Manzanar captured the forbidding setting of the camp, situated at the eastern edge of the Sierra Nevada mountains, some 200 miles northeast of Los Angeles. By comparison, most of his photographs focused less on the pain of incarceration than on how people coped with it. Adams sought to present his subjects as regular Americans, conducting their family lives, working in the fields, fixing vehicles and equipment, raising livestock, reading newspapers, playing baseball. As descendants of inmates have noted, “when you talk to the Japanese who lived through this, it is exactly what they wanted out of life. To be American, to be happy in their home with their family. It wasn’t true at the moment, but it was their dream.”1

In 1944, U. S. Camera published a selection of Adams’ images from Manzanar in a 112-page book entitled Born Free and Equal. Adams wrote that “Through the pictures the reader will be introduced to perhaps twenty individuals . . . loyal American citizens who are anxious to get back into the stream of life and contribute to our victory.” The book received positive reviews and made the San Francisco Chronicle‘s bestseller list for March and April of 1945. But when the photographs were shown at the Museum of Modern Art that year, they were met with controversy: America was still at war and Adams’ sympathetic depiction of Japanese Americans raised an outcry; the exhibition closed early and the book was cleared from shelves and destroyed.

For Adams himself, this project remained one of his most significant. When he eventually donated his collection of negatives and prints to the Library of Congress, he wrote: “The purpose of my work was to show how these people, suffering under a great injustice, and loss of property, businesses and professions, had overcome the sense of defeat and despair by building for themselves a vital community in an arid (but magnificent) environment…” 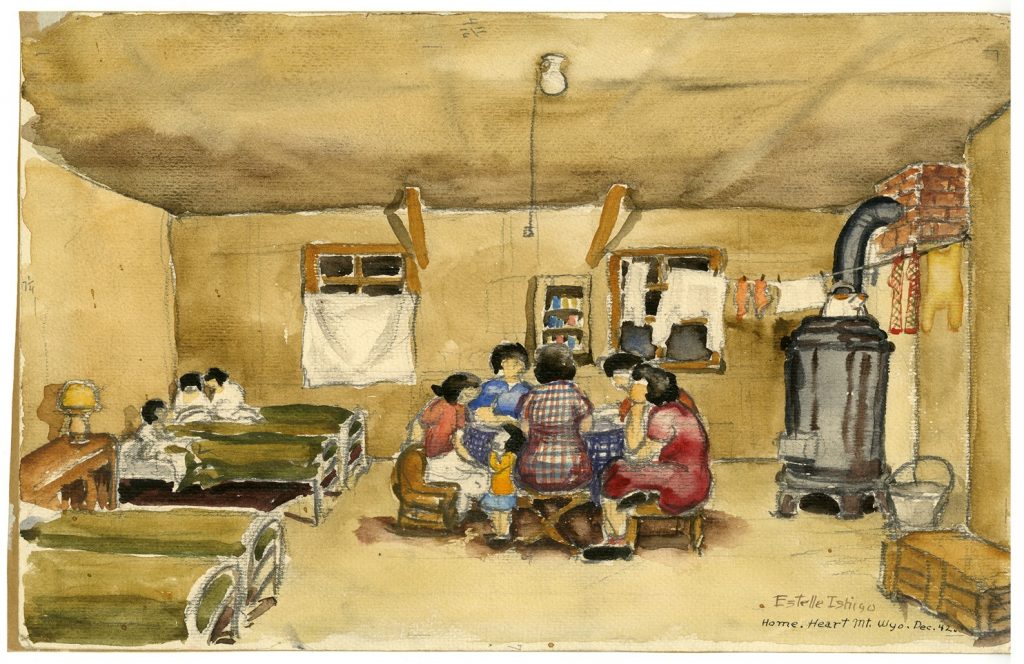 Estelle Peck was born in Oakland, California, to a concert singer and a portrait and landscape artist. She showed early talent for art and music, but at age 12 she was abandoned by her parents and went to live with relatives and strangers in Southern California. While attending Otis Art Institute, Estelle met an aspiring actor Arthur Ishigo, a second generation Japanese American. They fell deeply in love, but because of anti-miscegenation laws at the time, had to go to Mexico to marry in 1929.

Following the attack on Pearl Harbor, Estelle and Arthur lost their jobs—he because of his Japanese heritage, she because of her Japanese married name. When Arthur was ordered to an internment camp, Estelle, though Caucasian American, went with him: “Arthur and I were faced with the choice of separating or going into the camps together. I could not desert him. I wanted to stay with him no matter what happened, no matter where we were sent.” They ended up at Heart Mountain Relocation Center in Wyoming, where Estelle documented their lives through her evocative watercolor paintings, charcoals, and pencil drawings. She later published them, together with a narrative of her experience, in her book Lone Heart Mountain (1972). At Home at Heart Mountain is one of her artworks from the camp: it shows a close-knit family gathered warmly at a table in a modest room that serves as living and sleeping quarters for at least nine adults and children.

After the war, Arthur and Estelle continued to live in poverty. Anti-Japanese sentiment ran strong and they struggled to find steady work. Arthur’s health and spirit had been undermined by imprisonment, and he died in 1957 at the age of 55. Estelle remained in seclusion until 1972, when the California Historical Society approached her to share her drawings and sketches in an exhibition Months of Waiting. In 1983, former Heart Mountain inmates found her living in a basement apartment in Los Angeles on a $5 weekly stipend. She had lost both of her legs to gangrene. A few years later, Steven Okazaki, inspired by her book, decided to make a film about Estelle. She said, “I’ve been waiting for someone to tell my story. Now I can die.” She passed away in February 1990, shortly before Okazaki’s Academy Award winning Days of Waiting was released.

For Adams, Ishigo, and many others, art offered a way to process and give dignity to experiences of injustice and suffering. Art’s healing power has been a fundamental part of its appeal and endurance across time and cultures. As so many around the world are reckoning with the epidemic that ravages communities and families, art—in its myriad forms—gives many of us perspective, solace, and joy. 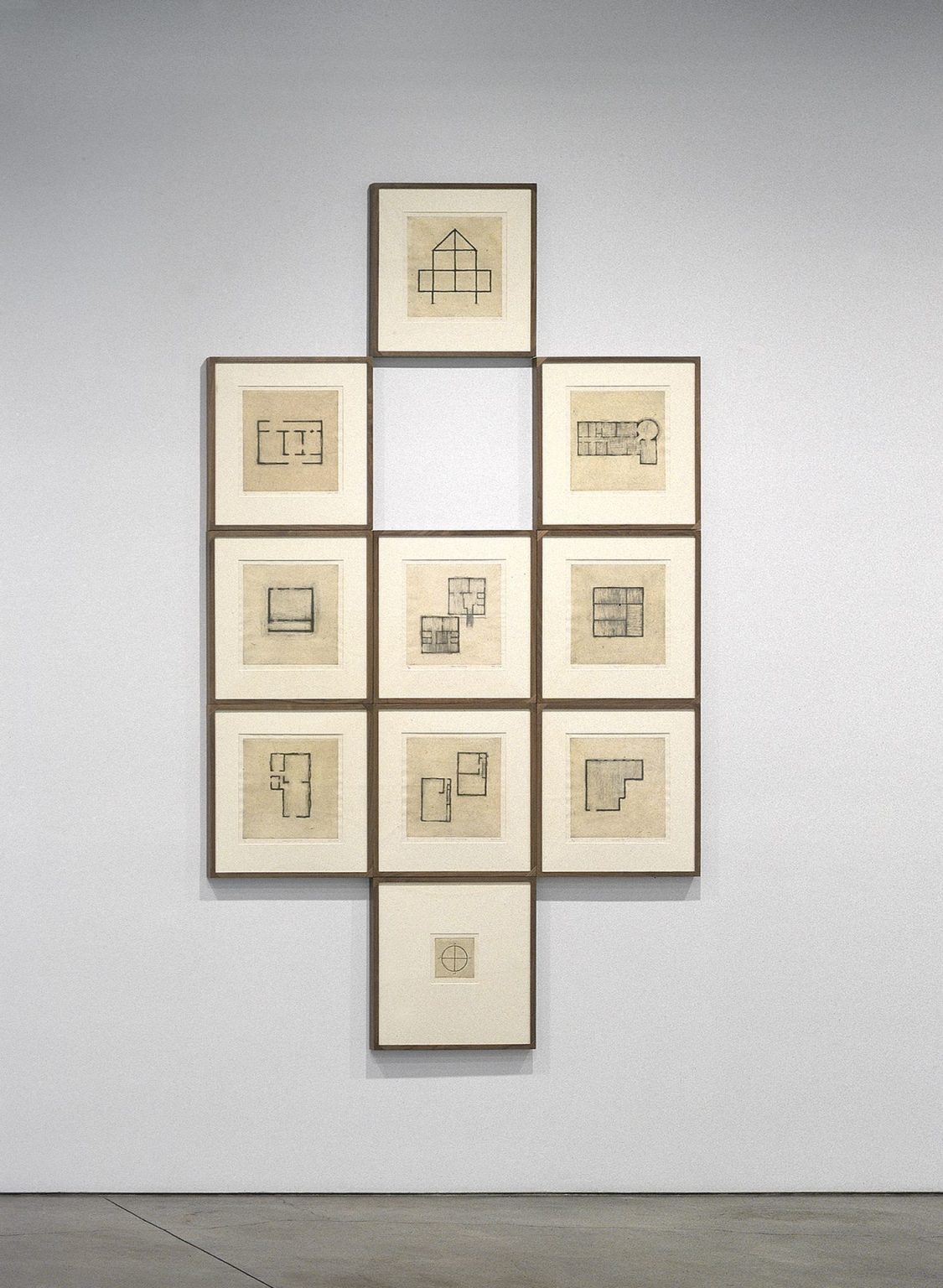 The artist Zarina’s series of etchings Homes I Made also appears within The Map and the Territory’s section, “Home and the Built Environment.” Zarina often dwelled on her complex relationship to “home” and the deeply personal memories intertwined with the many places she lived without planting roots in any of them.

Zarina lost her connection with her home after the 1947 partition of India, which resulted in her family’s dislocation to Pakistan. In 1958, she married a diplomat, whose assignments took them to Thailand, Japan, France, and Germany. In 1975, she moved alone to the United States, where she eventually made a life, but not a home. In an interview at the Metropolitan Museum in New York she said, “Some people who have come and settled in the United States don’t look back, but I’m not one of them. They are lucky! New York is not my home, this is someone else’s home. I’ve lived here for 40 years but my identity is basically that of an exile.”

This feeling of perpetual uprootedness underlies Zarina’s Homes I Made / A Life in Nine Lines: an autobiography rendered through floor plans of different homes she inhabited since leaving Aligarh. The larger and more complex plans document the years spent with her husband in India and Europe; the smaller and simpler spaces reflect her life on limited funds as an independent artist. The stark architectural drawings are paired with intimate handwritten inscriptions alluding to her memories of each place.

The scarred history of her country and her own peregrinations left Zarina with an enduring feeling of dispossession and longing: “Home is the center of my universe. I make a home wherever I am. My home is my hiding place, a house with four walls, sometimes with four wheels.” Her experiences, translated into art, resonate with her audiences. In the Metropolitan Museum of Art interview Zarina noted: “I have had people come to my show and start to cry. I always ask them why, and usually they say ‘that is our story also.’ A lot of them were people who were exiles from their own country: Holocaust survivors, or people who had the desire to return home.” 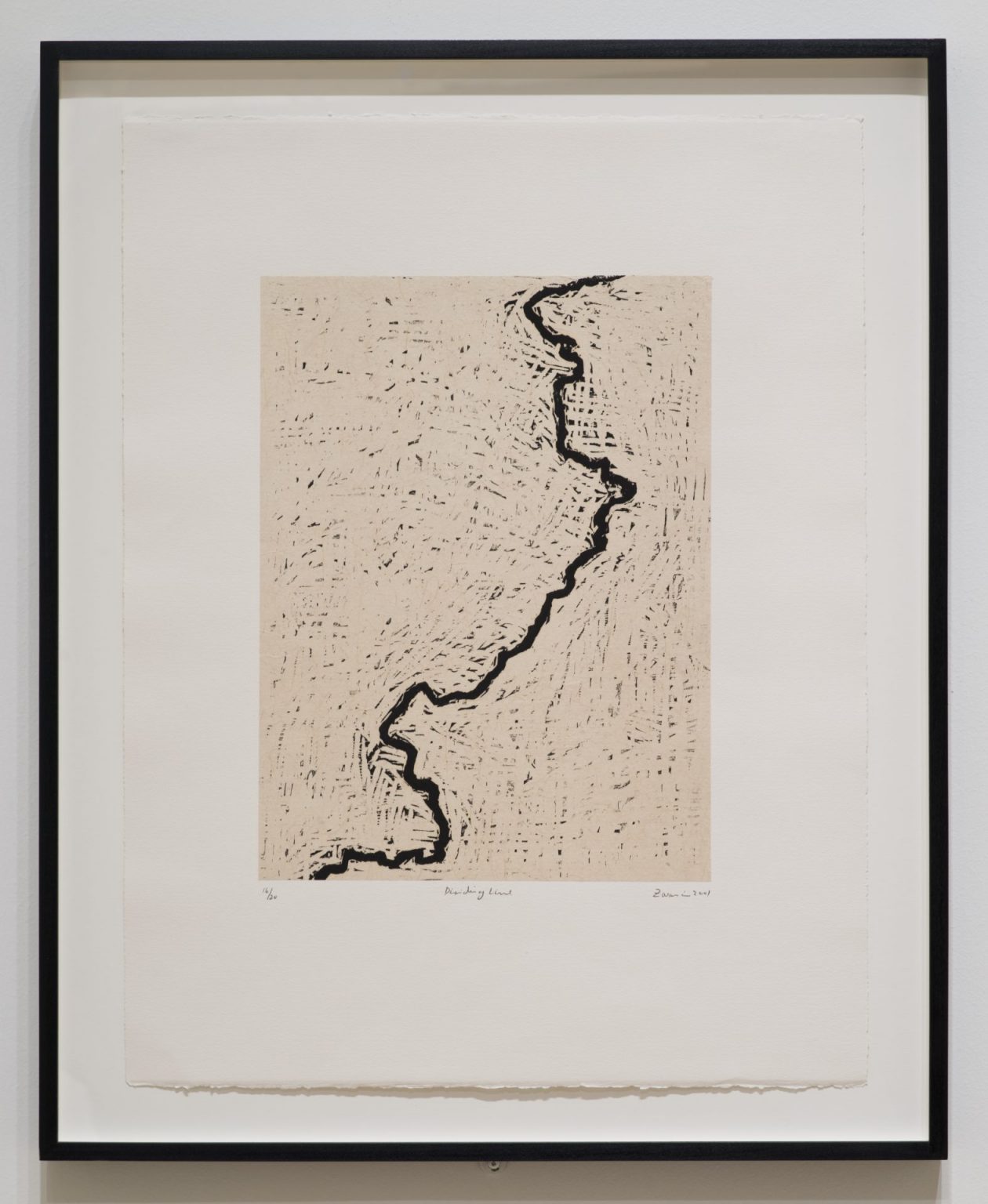 Zarina’s woodcut Dividing Line appears in the “Borders and Boundaries” section of The Map and the Territory. Drawing on her own life experiences, Zarina conveyed with great power how a line drawn on a map may seem to be an abstraction, but its consequences are very real for those separated by it. A jagged black gash ripping across a cream page is based on a drawing by the British colonial officer Sir Cyril Radcliffe that split India in 1947, resulting in the deaths and uprooting of millions of people. Zarina described the emotional toll of this division: “On one side [of the border] was the country that I loved, and on the other side were people whom I loved… the border is not on the land; it is drawn on one’s heart.” In creating this print, she not only carved the thick line in the wooden printing block, but gouged out the surrounding space, evoking the violence of the partition and its rippling effects.2

Themes of home and displacement, borders and journeys, history and memory that thread through Zarina’s creations invite us, too, to reflect on our losses and traumas, and to see them in the larger context of human experiences.3

1. https://www.sfgate.com/news/article/Ansel-Adams-Japanese-internment-WWII-6206027.php
2. Allegra Pesenti, one of The Map and the Territory’s co-curators, and the Associate Director and Senior Curator of the UCLA Grunwald Center for the Graphic Arts and Hammer Museum, described the importance of paper in Zarina’s work in the catalogue that accompanied the 2012 Hammer exhibition, Zarina: Paper Like Skin (Los Angeles: Hammer Museum). “Paper is central to Zarina’s practice, both as a surface to work on and as a material with its own properties and history.” In Zarina’s own words, “I looked at paper and just loved it. It is an organic material, almost like human skin: you can scratch it, you can mold it, it even ages.”
3. Not long after this article was posted, Zarina passed away at the age of 83. https://www.artforum.com/news/zarina-1937-2020-82843.