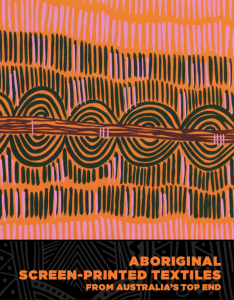 The judges serving on Textile Society of America’s Book Award Committee have selected a shortlist of three titles for this year’s R. L. Shep Award, for books published in 2020. The three were chosen from a list of twenty eligible books nominated by TSA members, publishers, and the general public earlier this year.

The selected books (listed below in alphabetical order, by title) share a number of features in common. All are expanded museum-exhibition catalogs, beautifully produced and extravagantly illustrated. Multiple contributing authors have worked under the guidance of the scholarly lead authors/editors to explore their subjects from various perspectives, digging deeply into the history of each tradition but also covering the most recent developments in globalized fashion.

Aboriginal Screen-Printed Textiles from Australia’s Top End is the work of Joanna Barrkman, Senior Curator of Southeast Asian and Pacific Arts at the Fowler Museum at UCLA, and an extensive group of contributors including many representatives of the Aboriginal communities whose work is featured in the book. Breathtakingly fresh and up-to-date, yet with roots that can be traced through thousands of years of ongoing cultural traditions in Australia’s far north, these works of textile art will be a revelation to most readers in the United States, presented here for the first time in a major exhibition.

Cloth That Changed the World: The Art and Fashion of Indian Chintz showcases the Royal Ontario Museum’s renowned collection of these technically-sophisticated South Asian textiles, which have captured the world’s imagination for centuries. Sarah Fee, ROM’s Senior Curator of Global Fashion and Textiles (Africa and Asia), heads an international team of contributors who explore how these magnificent cloths became a driver of the Indian Ocean trade linking Europe and Asia and thus played a major role in shaping the early modern world. Their influence on international fashion remains as strong today as ever.

Kimono: Kyoto to Catwalk appeared in conjunction with a 2020 V&A exhibition of the same title. Page after page of gloriously produced illustrations reveal stunning evidence of Japanese mastery of technique and design. Anna Jackson, Keeper of the Asian Department at the V&A provides the backbone descriptions of the evolution of the kimono as fashion in Japan, while numerous contributors explore how the kimono came to influence Western fashion and how it has more recently undergone a resurgence in Japan itself.

The R. L Shep Award is now in its twenty-first year and the number of nominated books has grown substantially, reaching twenty or more in the most recent award cycles. Last year the award committee began announcing a “shortlist” in order to bring well-deserved recognition to multiple leading contenders for the award in addition to the eventual winner.

The guidelines for the award define the category of ethnic textile studies and task the judges with selecting books that excel equally in field-advancing scholarship and in broad popular appeal. These requirements were set out deliberately with the goal of bringing the broadest possible public attention not only to the books themselves but also to the work and the interests of TSA.

perfect a match for the complete criteria for the award as the three shortlisted books (call it a longlist if you like); all are highly recommended for interested readers:

• A Fashionable Century: Textile Artistry and Commerce in the Late Qing, by Rachael Silberstein (University of Washington Press), is an extraordinary achievement in scholarship working with source materials that are little-known outside of China and not otherwise available in English.

• Tudor Textiles, by Eleri Lynn (Yale University Press) is a beautifully produced and written book, based on impeccable scholarship.

• Velvet on my Mind, Velvet on my Loom, by Wendy Landry (Schiffer Books), unites the author’s remarkable dedication to researching her subject with her masterly how-to instructions for would-be weavers of velvet.

The winning book to be chosen from this year’s shortlist of three titles will be announced by early September. The current award committee members are Roy Hamilton (chair), Dr. Cherubim Quizon and Dr. Elena Phipps. Cheree Quizon will be next year’s chair and nominations for books published in 2021 will be due by March 31, 2022 (TSA’s website will provide details after New Year).