15 May UCLA Collects! Bodies of Knowledge

Posted at 07:35h in by FM-admin 0 Comments
0 Likes
All Exhibitions

“The exhibition that, instead of lecturing, keeps you awake and amused about thousands of ways that various cultures and eras intertwine.”
Edward Goldman, KCRW’s Art Talk, May 17, 2005 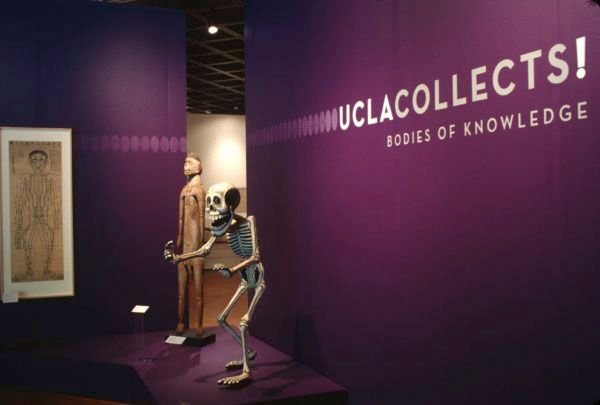 UCLA is an important repository for an astounding range of objects, from African masks to acupuncture charts to Renaissance prints to contemporary photographs. UCLA Collects! Bodies of Knowledge explored the role of collections in UCLA’s pursuit of knowledge and juxtaposes for the first time significant and diverse objects from five important UCLA institutions: the Fowler Museum at UCLA, the Grunwald Center for the Graphic Arts at the Hammer Museum, Department of Special Collections in the Charles E. Young Research Library, History and Special Collections in the Louise M. Darling Biomedical Library, and the Rock Art Archive in the Cotsen Institute of Archaeology.

The human body—so essential to our worldview—was the subject of the exhibition, which includes nearly two hundred objects from many disciplines, geographic regions, and eras. Medical and anatomical treatises; New Guinean and African sculptures; Mexican pâpier maché figures; works on paper by Matisse, Picasso and Rembrandt; photographs by Eadweard Muybridge, Imogen Cunningham, and Max Yavno; artists’ books; Native American and prehistoric rock art; and much more; were displayed together in a modern-day UCLA ‘cabinet of wonders.’

UCLA is an important repository for an astounding range of objects, from African masks to vintage acupuncture charts to Renaissance prints. How do these disparate objects contribute to the mission of a major research university, and what can we learn by considering them together for the first time?

‘UCLA Collects! Bodies of Knowledge’ explores the role of collections at the University and how collections have played a part in UCLA’s pursuit of knowledge in the 20th century and into the beginning of the 21st century.

This interdisciplinary exhibition juxtaposes significant and diverse collections of five UCLA institutions: the Fowler Museum at UCLA, the Grunwald Center for the Graphic Arts at the Hammer Museum, the Department of Special Collections in the Charles E. Young Research Library, History and Special Collections in the Louise M. Darling Biomedical Library, and the Rock Art Archive of the Cotsen Institute of Archaeology.

“When viewed together,” explains Marla C. Berns, director of the Fowler Museum and leader of the curatorial team organizing the exhibition, “we hope to suggest new links across cultures and disciplines—especially between the arts and sciences—and to create a modern-day ‘cabinet of wonders’ to delight and inspire our visitors.”

The human body, essential to our worldview, is the subject of the exhibition—focusing on its physical and conceptual manifestations through a remarkable variety of objects from many disciplines, geographic regions, and eras. Highlighted among the more than two hundred objects on display are medical and anatomical treatises, including the revolutionary text De Humani Corporis Fabrica by Andreas Vesalius; works on paper by Matisse, Picasso, Mantegna, and Rembrandt as well as contemporary artists Kiki Smith, Bruce Nauman, and Robert Gober; sculpture from Papua New Guinea and masks from the Democratic Republic of the Congo and Nigeria; photographs by Eadweard Muybridge, Imogen Cunningham, and Max Yavno; library holdings, such as a proof copy of Virginia Woolf’s Mrs. Dalloway with corrections in her hand; and prehistoric and Native American rock art.

Visitors will be greeted by three striking life-sized representations in different media and from various countries: a haunting 20th-century standing male sculpture from the Sepik area of Papua New Guinea, a lively 1980s pâpier maché calavera skeleton by the Linares family of Mexico, and a 19th-century woodblock print of the body’s acupuncture points by the Japanese artist Yoshimasu. These unique objects are displayed together to convey an overall goal of the exhibition: to suggest an alternative approach to knowledge, one whose value derives from visual and intellectual associations between objects rather than information about them, and one that relinquishes the rigidity of disciplinary models.

Subsequent galleries are organized around several themes—the body in its entirety, the head and face, the eye, and the hand—wherein the diverse collections interplay in intriguing and unusual ways. For example, the section on the eye will present several medical renderings from rare books, votive offerings from Japan and Peru, a set of fifty glass eyes dating from the mid-19th century, as well as sculptures from India and puppets from Asia that employ the eyes as metaphors for perceiving and understanding.

‘UCLA Collects’ will also include introductions to each of the collections, briefly describing their histories and missions and showcasing the strengths of their holdings with a selection of highlights from each. The exhibition concludes with a tribute to Franklin D. Murphy, Chancellor at UCLA from 1960–68, who was responsible for founding and/or supporting each of these collections. A true Renaissance man, as a doctor and a humanist he crossed the boundaries between the sciences and arts, just as this exhibition aims to do.

About the participating institutions:

Fowler Museum at UCLA
Established in 1963, the Fowler Museum at UCLA explores global arts and cultures, with an emphasis on works from Africa, Asia, the Pacific, and the Americas, past and present. The Fowler’s collections comprise more than 150,000 works of art as well as 600,000 archaeological objects.

Rock Art Archive, Cotsen Institute of Archaeology
The UCLA Rock Art Archive is a research unit of the Cotsen Institute of Archaeology. Emphasizing ancient aesthetics of unique cultures with a focus on California, the Far West and Pacific islands, this collections include 300,000 images in fifteen named collections, 6,000 unpublished documents describing or analyzing 233 California sites, a specialized rock art library, and correspondence files outlining the history of modern rock art studies.

Grunwald Center for the Graphic Arts, Hammer Museum
Established in 1956 with a substantial gift from Fred Grunwald, UCLA’s Grunwald Center has been steadily enriched through significant acquisitions and private donations. Today, the Center’s holdings comprise more than 45,000 European, American, and Japanese prints, drawings, photographs, and artists’ books dating from the Renaissance to the present.

Special Collections, Charles E. Young Research Library
The Department of Special Collections in the Charles E. Young Research Library houses and provides access to the UCLA Library’s central collection of rare books and manuscripts in the humanities and social sciences. Founded in 1946, its rare book holdings consist of some 333,000 volumes, while its non-book holdings comprise more than 30 million manuscripts, five million photographs and negatives, ephemera, maps, works of art, architectural drawings and models, and other graphic arts material.