18 May The Keiskamma Altarpiece: Transcending AIDS in South Africa

Posted at 05:30h in by FM-admin 0 Comments
0 Likes
All Exhibitions

This monumental, multi-panel artwork was created by 130 women from South Africa’s Eastern Cape province — an area of the world hard hit by AIDS — to commemorate the lives and memory of individuals there who have died of the disease and to celebrate the community’s determination to prevail in the face of AIDS.

Based on the famed Isenheim altarpiece created by Matthias Grünewald in 16th-century Germany to celebrate the region’s deliverance from a plague, the colossal ‘Keiskamma Altarpiece’ uses embroidery, beadwork, wire sculpture, and photographs to offer a message of hope. Measuring 13 feet high by 22 feet long, the vibrant and colorful altarpiece is composed of a series of hinged panels that utilize the imagery of the Xhosa people of the Eastern Cape to depict life in the region before — and after — AIDS engulfed South Africa. Fully opened, the altarpiece reveals dramatic, life-size photographs of three local grandmothers and their grandchildren, some orphaned by AIDS, and their hope for the future. 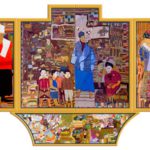 The crucifixion is depicted from the point of view of people without material resources trying to find meaning in their lives. The somber crucifixion panels show a widow in traditional Xhosa mourning her husband has died of AIDS. On her right are children orphaned by the disease and on her left is an old lady sitting on a bed.

On either side of this central panel are two Hamburg saints’ wise old ladies chosen for this position because of their love for the community. Lagena Mapuma is dressed in a red Methodist church uniform and Susan Paliso with a white shawl. 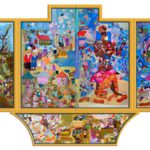 The doors open to a vision of hope, redemption and restoration. Images of abundant life with trees, birds, spiritual worship and harmonious traditional life are used to illustrate these ideals, and a local prophet who runs prayers in the sand. 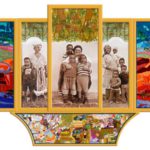 The final set of doors is opened to reveal life-size black and white photographs of grandmothers with their grandchildren. These photographs were taken by Tanya Jordaan. From the left is Susan Paliso (83) with Lihle (8), Eunice Mangwane (58) is seated in the centre with her grandchildren Akona, Lithemba and Thabo. Caroline Nyongo (47) is holding her youngest grandchild Nomaxabiso (8 months), and is surrounded by the rest of her daughter’s children.

Above these photographs are three dimensional wire bead work, depicting Coral and Acacia trees with the 4 Apostles as seen in the Issenheim altarpiece. Eddie came from streetwires in Cape Town to teach to the women and men in the project this form of beadwork.

The Praella depicts the funeral of Susan Paliso’s son who has died from AIDS. The funeral took place in Hamburg. It is drawn with all the details of a typical Eastern Cape funeral.

See more images and information by visiting the website of the Kaiskamma Trust.

The collaborating institutions listed below have been touring this elaborate altarpiece across North America, beginning at Toronto’s Cathedral Church of St. James in July during the World AIDS Conference. It then was on display at St. James Episcopal Cathedral in Chicago through Sept. 20, 2006 and toured churches in Los Angeles and Pasadena throughout the fall and winter under the auspices of Artists for a New South Africa before its exhibition at UCLA.

The Fowler Museum explores art and material culture primarily from Africa, Asia and the Pacific, and the Americas, past and present. The Fowler seeks to enhance understanding and appreciation of the diverse peoples, cultures, and religions of the world through highly contextualized interpretive exhibitions, publications, and public programming, informed by interdisciplinary approaches and the perspectives of the cultures represented. https://www.fowler.ucla.edu

The UCLA AIDS Institute is a multidisciplinary think tank drawing on the skills of top-flight researchers in the worldwide fight against HIV and AIDS, the first cases of which were reported in 1981 by UCLA physicians. Institute members, led by Dr. Irvin Chen, include researchers in virology and immunology, genetics, cancer, neurology, ophthalmology, epidemiology, social science, public health, nursing, and disease prevention. Their findings have led to advances in treating HIV as well as other diseases, such as hepatitis B and C, influenza, and cancer. http://www.uclaaidsinstitute.org

The Art | Global Health Center at UCLA serves as the umbrella for the international Make Art/Stop AIDS project, a network of artists working with experts in public health and medicine to intervene in the AIDS epidemic. The exhibition of ‘The Keiskamma Altarpiece’ marks the inauguration of this new center, which is directed by David Gere, associate professor and co-chair of the UCLA Department of World Arts and Cultures.

Artists for a New South Africa

Artists for a New South Africa (ANSA) is a nonprofit organization dedicated to combating the African AIDS pandemic and advancing democracy and equality in South Africa. ANSA also works to further civil rights and safeguard voting rights in the U.S. In partnership with South African and American organizations, grassroots movements, leaders, artists and activists, ANSA works to make a difference through public education and mobilization, advocacy, grantmaking, media campaigns and the provision of material aid. http://www.ansafrica.org

This Fowler presentation is part of MAKE ART/STOP AIDS, an arts and AIDS awareness and prevention initiative developed by the UCLA Art | Global Health Center in partnership with the Fowler, UCLA’s AIDS Institute and Department of World Arts and Cultures, the Durban Art Gallery, Artists for a New South Africa, and the Magic Johnson Foundation.

Made possible in part by UCLA’s Center for Community Partnerships and Office of Instructional Development, UCIRA, and the Liberty Hill Foundation.