Posted at 03:21h in by FM-admin 0 Comments
0 Likes
All Exhibitions

“Provides more than just a lecture on the difficult subject of AIDS and the fragility of life: it finds poetry where few of us dare to search.”
Edward Goldman, KCRW’s Art Talk, Feb. 26, 2008

Make Art/Stop AIDS is an internationally traveling exhibition debuting at the Fowler that explores how artists around the world are responding to HIV/AIDS and how their work raises awareness, inspires activism, and can ultimately help end global AIDS. Featuring examples primarily from the United States, South Africa, India and Brazil—four disparate nations whose distinct experiences with and responses to the epidemic make insightful studies —Make Art/Stop AIDS presents approximately sixty works including contemporary paintings and sculptures, photographs, performance videos, posters, animated shorts, digital media, installations and more to record the history of the epidemic, to appreciate its enormity, and to share information and ideas about future interventions. The exhibition features work by Robert Gober, David Wojnarowicz, Fiona Kirkwood, Daniel Goldstein, Jean Carlomusto, and the collective Gran Fury, among many others.

For more than twenty-five years, artists have joined with activists, medical experts, and others to inspire, provoke, and guide the radical changes that the global AIDS crisis demands. Make Art/Stop AIDS—an internationally traveling exhibition debuting at the Fowler Museum at UCLA on Feb, 23, 2008—shows how artists around the world have responded to HIV/AIDS and how their work can raise awareness, inspire activism, and ultimately help end global AIDS. The exhibition will be on display through June 15, 2008.

Featuring examples from the United States, South Africa, India and Brazil—four disparate nations whose distinct experiences with and responses to the epidemic make insightful studies —Make Art/Stop AIDS presents more than sixty contemporary works including paintings, sculptures, photographs, performance videos, posters, animated shorts, digital media, and installations that engage these questions: What is AIDS? Who lives, who dies? Why are condoms controversial? Are you afraid to touch? When was the last time you cried? Why a red ribbon? Are you ready to act?

“This collection of stunning works from around the world underlines the substantial contribution artists can make in times of crisis. This work is not for auction—it’s not intended to raise money for AIDS services or scientific research. Its function, rather, is to intervene in the epidemic by shifting attitudes, educating, mourning, and goading, sometimes all at the same time,” says David Gere, co-curator.

Make Art/Stop AIDS opens by exploring how the AIDS epidemic is a socio-cultural phenomenon, shaped by belief, behavior, migration patterns, phobias, and gender-based inequities. Works of art make a significant contribution to defining the epidemic by reminding us that AIDS arises within our complex social worlds—worlds defined by difference, desire, inequality, and sometimes even violence. Included in this section are photographs that depict the various social impacts of AIDS by David Goldblatt, Zanele Muholi, Sunil Gupta, and others, as well as Lennart Nilsson’s strangely beautiful scanned electron microscope photograph of HIV, and a large-scale video projection by South African artist Churchill Madikida.

Who lives, who dies?

The next section of the exhibition illustrates how artists have made the political and ethical challenges of treatment a key focus of their work. Gregg Bordowitz’s installation Drive, 2003, which includes a line of clocks and the statement “The Aids Crisis is Still Beginning,” draws a direct connection between the epidemics in the U.S. and South Africa. Daniel Goldstein’s and John Kapella’s glittering, life-sized mobile Medicine Man, 2007, made of hundreds of pill bottles and needles, brings into focus the debate over access to life-saving medications. Photographs in this section by Pieter Hugo and David Wojnarowicz boldly address deaths caused by AIDS.

Why are condoms controversial?

When used properly, condoms virtually eliminate the spread of sexually transmitted diseases. Yet some governments and religious institutions continue to argue against the use of condoms, or spread misinformation about their use, such as this past summer when Mozambique’s Roman Catholic archbishop accused European condom manufacturers of deliberately infecting their products with HIV. In this section of the exhibition, visitors are asked to ponder why the latex condom—one of the most significant public health inventions of the last century—is so contentious.

Brazilian artist Adriana Bertini’s eye-popping hot pink “dress” made entirely of thousands of condoms will be displayed along with Fiona Kirkwood’s 24-feet-long installation of men’s and women’s condoms that spells out the word “Survival.” Both pieces promote condom use and open up lines of communication on issues that would otherwise remain taboo. Other works, like the short video Perdão (Forgiveness) by Grupo Gay da Bahia, interrogate how moral dogma restricts access to information and products that can most effectively protect one’s health.

Are you afraid to touch?

In reaction to AIDS-related stigma, Indian photographer Dayanita Singh and American artist Sue Coe have focused on the simple act of touching—reinforcing the notion that hugs and handshakes are utterly safe activities. Working in a variety of media, artists whose work is featured in this section invite us to witness compassionate moments between caregivers and those living with or dying from AIDS. Even the tactile art of puppetry is being used to explore AIDS and touch, as evident in the performances on display by the innovative Indian AIDS activist/artist Anurupa Roy.

When was the last time you cried?

In 1993, the arts collective Gran Fury posed four simple questions on posters throughout New York City. The final question, “When was the last time you cried?” brought grief into the public space of their activism, acknowledging mourning as an essential experience of the AIDS epidemic. Given that sexuality and drug use are closely tied to transmission, many view AIDS-related illness and death as a form of punishment. To counteract this view, artists such as Jean Carlomusto, whose installation The Portrait Gallery of AIDS: A Living Archive, 2002 is displayed in this section, offer loving visual records, while other artists have created public performances of grief and mourning, such as Tracy Rhoades’ video Requiem.

Why a red ribbon?

In the late 1980s the red ribbon emerged as a direct reference to bureaucratic red tape, alluding subtly and poignantly to the need to speed up the pace of drug trials conducted by the U.S. Food and Drug Administration and to immediately provide experimental treatments for the ill and dying.

Since that time, the tension between ribbon as fashion statement and ribbon as activist symbol has been catalyzed by artists on several continents—making it one of the most recognizable, if perhaps overused, icons in the world. Creative artists continually strive to reinvigorate the symbol or, at the very least, to question its meaning.

This section includes a photograph documenting how community artists in Durban, South Africa wrapped a civic building in a huge red ribbon to demand governmental action, while David Goldblatt’s record of faded and tattered red ribbons across that country underscores failed promises to act against the epidemic. Artists in India, meanwhile, reinterpret the ribbon in particularly novel materials, as evident in a display of twenty-one ribbons, ranging from a glitzy profusion of gold and silver to the more humble terracotta.

Are you ready to act?

This final gallery is designed to inspire museum visitors to learn more about the epidemic and to share that knowledge with others. A recreation of Gran Fury’s and ACT UP’s iconic neon sign SILENCE=DEATH, originally installed at the New Museum of Contemporary Art in 1987, as well as a video installation by the collective Ultra-Red, and other works demonstrate that acts of intervention can take many forms, and ask visitors to consider their own role in this crisis. 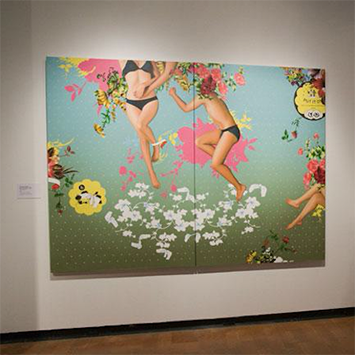 A Look Back: Make Art/Stop AIDS

As coronavirus cases rise in California, we recall an exhibition that opened at the Fowler over a decade ago: Make Art/Stop AIDS (February 23–June 15, 2008), co-curated by David Gere and Robert Sember. 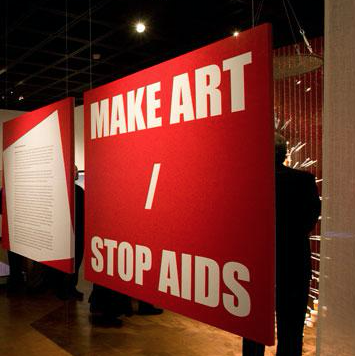 How to Make Art in a Pandemic

David Gere, professor of arts activism in the UCLA Department of World Arts and Cultures/Dance and director of the UCLA Art & Global Health Center, discusses art, activism during the HIV/AIDS pandemic, and the career of the late activist Larry Kramer.

Make Art/Stop AIDS is made possible through grants from the Ford Foundation, Andy Warhol Foundation for the Visual Arts, and Peter Norton Family Foundation.

Special thanks to the Brazilian Consulate of Los Angeles.