17 May His Masters’ Tools: Recent Work by Allan deSouza

Posted at 07:58h in by FM-admin 0 Comments
0 Likes
All Exhibitions

In a specially created edition of new and recent work, San Francisco-based performance and photo-conceptual artist Allan deSouza uses digital manipulation to play with notions of artistic and technological mastery and to blur the boundaries between photography and painting.

The exhibition focuses on two new series—“Rdctns” and “Third Eye”—both of which engage critically with the language and visual legacies of Western fine art by reworking primitivist paintings by Paul Gauguin and Henri Rousseau or self-portraits by canonical artists such as Chuck Close, Pablo Picasso and Andy Warhol. The works on display run the gamut from large-scale, gorgeously colored and sensuous abstractions to modestly-sized photographic prints.

DeSouza, who is of South Asian descent, was born in Nairobi, Kenya in 1958. He received his MFA in Art from UCLA in 1997.

As a play on words, His Masters’ Tools (abbreviated as htm) has several references: colonial masters, oedipal father figures, and masters—old and new—of the Western artistic tradition. It also recalls the view espoused by some scholars of African American literature that witty or unorthodox use of language can be subversive, a way of using the master’s own tools to dismantle the master’s house. As these multiple associations suggest, deSouza pursues his practice as a kind of artist-cum-trickster figure, who plays with the visual language and legacies of both Western fine art and popular culture to shed new light on his subject matter. His work draws on themes of travel and tourism, genealogy and family history, historical issues of diaspora, and changing patterns of migration to frame questions of otherness and cultural stereotyping in ways that are cerebral, wickedly playful, and irreverent.

Allan deSouza uses Photoshop to create many of his works by digitally “re-painting” scanned photographs or digital reproductions of Western masterpieces images found on the Internet. The dominant color in each work is determined from a particular spot in the original painting: in Third Eye the color is selected from the mid-forehead of each self-portrait, the site of the proverbial “third eye”; while in Rdctns, the color is chosen from the “furthest point,” usually the vanishing point on the horizon line.

This is how deSouza described his technique in conversation with Gemma Rodrigues, a co-curator of the exhibition:

“I would find the color of that particular spot in the painting, keep that color in the memory and then I would select other colors all one color at a time and then return to the original color selected and apply that color to the color that was selected. I would keep doing that and select one color at a time, and I would decide beforehand the parameters of how broad ranged the color swatch would be each time. So it’s a very physical process, constantly using the mouse, constantly moving my hand, a constant gesture of almost wiping across the screen. There is a kind of gesture of physical erasure, almost like wiping away, and it’s very laborious. There’s this constant repetition, which actually gave me carpal tunnel. It’s sort of tedious and I realized that there were quicker ways to do it, but it was partly that I had begun the process and wanted to stick to it, but also that I realized the labor was part of the work. A central part of it for me was that I needed to actually engage with the physical surface or the virtual surface, literally inch by inch.”

In Third Eye, deSouza digitally remasters Internet reproductions of well-known self-portraits by old and new masters of the Western artistic tradition to the point where only traces of the original are recognizable. Using a pre-determined system to govern the remaking of the portraits and the reference to the third eye as site of transcendent knowledge raises questions about Western mythologies of artistic genius. While deSouza replays his own encounter with Western art history, earlier cross-cultural encounters and appropriation such as Matisse and Picasso’s debts to African art are also implicit.

Returning to another set of cross-cultural encounters, the Rdctns are the outcome of digital manipulations of textbook reproductions of late nineteenth- and early twentieth-century Primitivist masterpieces by Paul Gauguin and Henri Rousseau.

DeSouza’s decision to title this series Rdctns—the word “redaction” with the vowels removed—gestures toward his desire to remake the legacy of this chapter in Western art history by erasing or obscuring part of its record.

“I was using the term “redaction” for its connotations of meaning as a form of re-editing,” explains the artist, “and of course our familiarity with the term is mostly through government files or FBI files, where secret files are opened to the public but they’ve been redacted, and the redaction is in the form of black marks laid over the text. So the full text is still there, it hasn’t actually been cut out. The notion that the text is still there but it’s just overlaid with something, was what I was interested in. So here, I am removing layers to get back to what was maybe a kind of underlying fantasy.”

The artist chose the titles for all the pieces in this series by color-matching the works with color swatches from the Virtual Fan Deck of Benjamin Moore, an east coast home décor company. The names, which tend to evoke fantasies of escape from dull, workaday routines to sensory paradises in faraway places, suggest the degree to which certain aspects of late nineteenth century attitudes towards remote peoples and places are still linger in contemporary Euro-American culture. 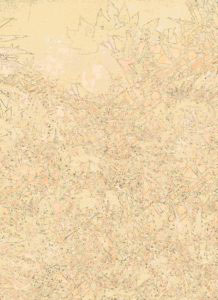 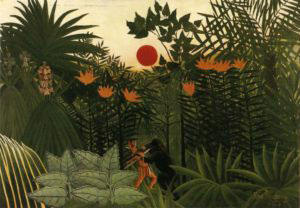 Mango, 2011 — Underlying this C-print is a reproduction of Rousseau’s AmerIndian with Gorilla (1910). 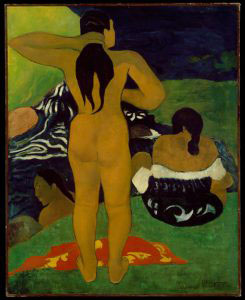 Oriental Iris, 2011 — Underlying this C-print is a reproduction of Gauguin’s Women Bathing (1892). 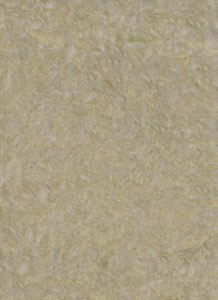 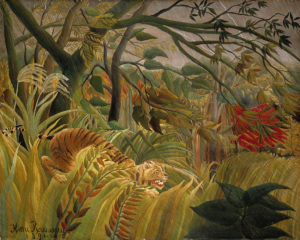 Turtle, 2011 — Underlying this C-print is a reproduction of Rousseau’s Tiger in a Tropical Storm (1891). 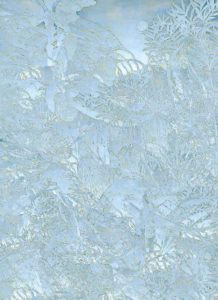 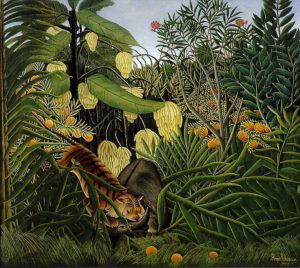 Polar Sky, 2011 — Underlying this C-print is a reproduction of Rousseau’s Fight between a Tiger and a Buffalo (1908). 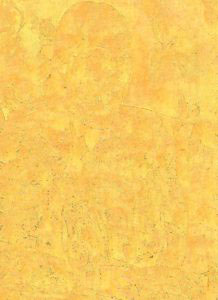 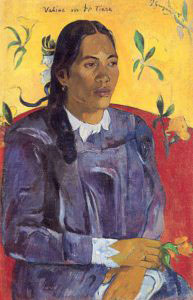 Imperial, 2011 – Underlying this C-print is a reproduction of Gauguin’s Woman with Flower (1891). 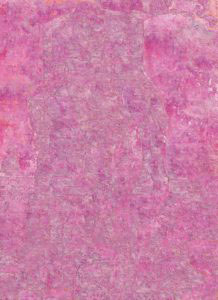 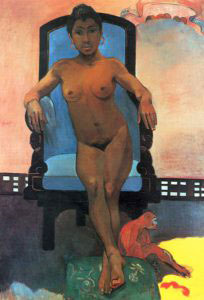 Can you ever go home again? DeSouza traveled back to his native Kenya in 2003. While there, he felt overwhelmed by the experience of having left the place as a child, by the memories that remained with him, and by the alienating effects of geographic distance. One culmination of this visit is the five-panel photographic narrative, The Searchers. The images show a multiethnic group searching for wildlife and photographing the local landscape just outside Nairobi. The title recalls John Ford’s 1956 western of the same name, in which the character played by John Wayne conducts a five-year search (and presumably rescue) mission for his young relatives who have been kidnapped by a band of marauding “Indians.” Except that, unable to face the thought of the taint of miscegenation caused by the years of living with their captors, he instead plans to kill them. Finally he relents, overcoming or at least learning to live with his racism. After returning to Kenya, deSouza perceived this tale of conflict (ir)resolution on the colonial frontier as a parable of a new (post-Civil War) nation–the US, transcribed to a new post-Independent country–Kenya.

If home is somehow difficult to locate in The Searchers, The Lost Pictures series marks deSouza’s attempt to bridge a related gulf—this time a temporal one. Before he returned to Kenya, much of his visual memory of the place was framed by his father’s archive of 35mm slides shot in Kenya during the 1960s while deSouza was still a child. On his return, deSouza was struck by the sensory shock of re-experiencing place compared with the relative sensory paucity of memories shaped by a photographic record. DeSouza discovered his memories of his Kenyan childhood shifting and changing “before his eyes” as they accrued fresh information and vivid, sensory detail. The malleable, palimpsest-like nature of memory, a kind of inner vision that is continually being reworked in light of new experience and new knowledge, became the topic of The Lost Pictures. On his return to California, deSouza made prints of the slides, which he left lying around his home where they accumulated various physical traces of deSouza’s daily life – such as water spots, hair, and grease—before being rescanned and printed again.

The resulting images meld different time periods–an ongoing present with a remembered and recorded past–and meld a personal familial history with a national one, since some of the images record the day of Kenya’s independence in December 1963. They draw our attention to the limitations of the photograph in reconstituting memory and further complicate the relationship between documentary and artistic practices.

X.Man is a self-styled performance artist and urban ethnographer based in San Francisco. He is also deSouza’s fictional alterego, who relishes engaging with risqué or difficult material that others might avoid. The photo-collages in X.Man’s eponymous series draw on postcard iconography and pop-culture imagery to create composite images that parody tourism and travel as contemporary versions of the colonial encounter. Starring the outrageous monkey named “Why,” X.Man inverts the logic of cross-cultural encounter to explore the experience of being the racial “other” in contemporary society. “Why,” who is sassy, erudite, quick, and unafraid of stirring trouble, recalls the Signifying Monkey trickster figure of African American literary tradition, a character who uses his verbal skill to overturn master-slave hierarchies. “Why” constructs and inhabits a densely woven, multi-layered web of allusions where, like the Signifying Monkey, he “dwells at the margins of discourse, ever punning, ever troping, ever embodying the ambiguities of language” (Gates, 1988: 52). Wryly describing the thoughts and feelings that led to this work, X.Man writes, “Whereas other people seek their inner child, I was pretty young when I discovered my outer simian.” Ever on point, X.Man questions the limits of his own artistic practice, asking: “Is it possible to parody a racist image without perpetuating its racism? Or even to produce an anti-racist one through parody?”