17 May Central Nigeria Unmasked: Arts of the Benue River Valley

Posted at 07:05h in by FM-admin 0 Comments
0 Likes
All Exhibitions

The Benue River Valley is the source of some of the most abstract, dramatic, and inventive sculpture in sub-Saharan Africa. Yet compared to the majority populations living in northern and southern Nigeria, the many and diverse groups flanking the 650-mile-long Benue River—and their fascinating arts—are far less known and studied. Central Nigeria Unmasked: Arts of the Benue River Valley will be the first major international exhibition to present a comprehensive view of the arts produced in the region. See more than 150 objects used in a range of ritual contexts, with genres as varied and complex as the vast region itself—figurative wood sculptures, masks, figurative ceramic vessels, and elaborate bronze and iron regalia—in a groundbreaking exhibition that demonstrates how the history of central Nigeria can be “unmasked” through the dynamic interrelationships of its peoples and their arts.

The 650-mile-long Benue River—the largest tributary of the great Niger—flows across the geographic center of Nigeria. Unfolding as a spectacular journey up the Benue, Central Nigeria Unmasked introduces major artistic genres and styles associated with more than twenty-five ethnic groups living along the river’s Lower, Middle, and Upper reaches. These diverse and remarkable artworks include sculptural forms in wood, ceramic, and metal. Among them are full-bodied maternal images; sleek columnar statues; helmet masks with naturalistic human faces; horizontal masks that appear as stylized animal-human fusions; imaginatively anthropomorphized ceramic vessels; and elaborate regalia forged in iron and cast in copper alloys. All of these varied objects had meanings and purposes crucial to Benue Valley peoples as they confronted and resolved life’s challenges.

Within this broad regional view the exhibition pauses to highlight distinctive community traditions and the ways that artists have freely innovated within the parameters of local styles. Through their often surprising resemblances, the artworks associated with neighboring peoples can also bear witness to historical communication and interaction across communities. Artistic genres throughout the region were rarely confined to particular peoples, places, or even contexts of use, and their “life histories” were seldom simple. Artworks could be made by one group and used by another where meanings might change; stylistic traits could be shared across cultures; and the places where objects were collected may not have been where they were created.

This exhibition unmasks the fluid and dynamic nature of art and the local spheres of interaction, adaptation, and transformation in which objects have moved. Over the centuries, the Benue River Valley witnessed a confluence of peoples, institutions, and ideas that is only now beginning to be understood as having resulted in one of the major artistic legacies of Africa. 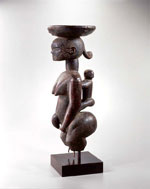 The area around the confluence of the Niger and Benue Rivers has been the home to a changing constellation of peoples over many centuries. Today it is where the Igala, Ebira, Idoma, Afo, and Tiv peoples live, among others. The lower stretches of the Benue, a mile wide during the rainy season, have long been both a pathway and barrier: a path of escape, trade, or migration, but a barrier against advancing armies and other intruders. The incursions of the Fulani dislodged peoples from the north side of the Benue, who fled to the south, often with their important ritual objects. 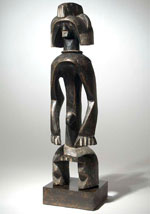 The largest and most ethnically and geographically complex of the Benue subregions is the Middle Benue. Most contemporary ethnic identities within this area crystallized only during the colonial period, because the British needed them for administrative purposes, and local people embraced them out of a sense of belonging. The works of more than ten of these culture groups—with an emphasis on the Jukun, Mumuye, Chamba, Wurkun/Bikwin, Goemai, Montol, and Kantana/Kulere—are featured here. 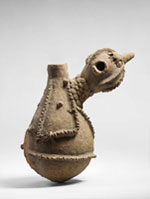 Due to its relative isolation, the Upper Benue is distinct from other areas of the river valley. Its rugged, hilly terrain provided shelter from the incursions of invading groups, especially mounted Fulani warriors. The remoteness of the region also meant that local ritual practices were able to persist well into the late twentieth century when they were documented in the field. The arts of eight of the diverse peoples living in this subregion are represented here with a focus on the Cham-Mwana, Longuda, Jen, Ga’anda, ‘Bәna, and Yungur.

Major support for the exhibition is provided by the National Endowment for the Arts, the Shirley and Ralph Shapiro Director’s Discretionary Fund, Ceil and Michael Pulitzer, Jay and Deborah Last, Joseph and Barbara Goldenberg, Robert T. Wall Family, and Jill and Barry Kitnick. Major funding for the publication is provided by The Ahmanson Foundation with additional support from the Ethnic Arts Council of Los Angeles. The planning phase of this project was funded by a grant from the National Endowment for the Humanities.

Additional funding for this exhibition is provided by Udo and Wally Horstmann, Edwin and Cherie K. Silver, and Helen Kuhn.

The accompanying programs are made possible by Fern Wallace, the Jerome L. Joss Fund, the Yvonne Lenart Public Programs Fund, and Manus, the support group of the Fowler Museum.