15 May Art of the Austronesians: The Legacy of Indo-Pacific Voyaging

Posted at 06:03h in by FM-admin 0 Comments
0 Likes
All Exhibitions

Art of the Austronesians: The Legacy of Indo-Pacific Voyaging

Art of the Austronesians explores the history and development of the arts and cultures of the Austronesian-speaking peoples—from their prehistoric origins in what is now Taiwan to their successive seafaring migrations over millennia throughout the Philippines, Indonesia, the Pacific, and beyond. The first major exhibition in the United States to examine the visual arts of the entire Austronesian world comparatively in a single project, it features a number of important pieces from the Fowler’s collection. Additional works borrowed from private California-based collections, many on view to the public for the first time, contribute to the remarkable breadth of the installation.

Most of the featured artworks date from the last two hundred years and therefore reflect a variety of accumulated influences. Visitors may, nevertheless, trace their development through time as the Austronesian world expanded and discern among them repeated themes suggesting a common heritage. With nearly 200 works on view, the exhibition offers visitors a rare glimpse into the cultures of the descendants of these voyaging peoples through their visual arts.

Art of the Austronesians: The Legacy of Indo-Pacific Voyaging 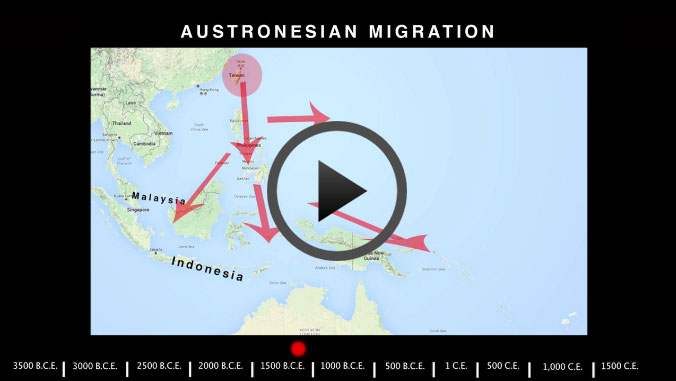 
Mirrors into the Past: Art in the Lapita Region from New Ireland to New Caledonia
Michael Gunn, Senior Curator for Pacific Arts, National Gallery of Australia, Canberra


Austronesians in the Pacific: The Lapita Trail and Beyond
Patrick V. Kirch, Professor Emeritus, Department of Anthropology, UC-Berkeley

Art of the Austronesians is organized by the Fowler Museum at UCLA and curated by Roy W. Hamilton, Senior Curator of Asian & Pacific Collections. Major funding for the exhibition is provided by the Shirley and Ralph Shapiro Fund and the Ethnic Arts Council of Los Angeles. Additional support is provided by Ned and Mina Smith, Martha and Avrum Bluming, Edmond Chin, and Thomas Murray. The accompanying symposium has been funded in part by Thomas Murray who has generously matched individual gifts made by Edmond Chin, Don Bierlich, the Ethnic Arts Council of Los Angeles, the Fowler Textile Council, Marc Franklin, Greg and Mechas Grinnell, Michael Hamson, Mark A. Johnson Tribal Art, Carolyn and Charles Knobler, Textile Museum Associates of Southern California, Chuck Thurow, Janis and Bill Wetsman, and Insulinde Indonesian Arts – Frank R. Wiggers.