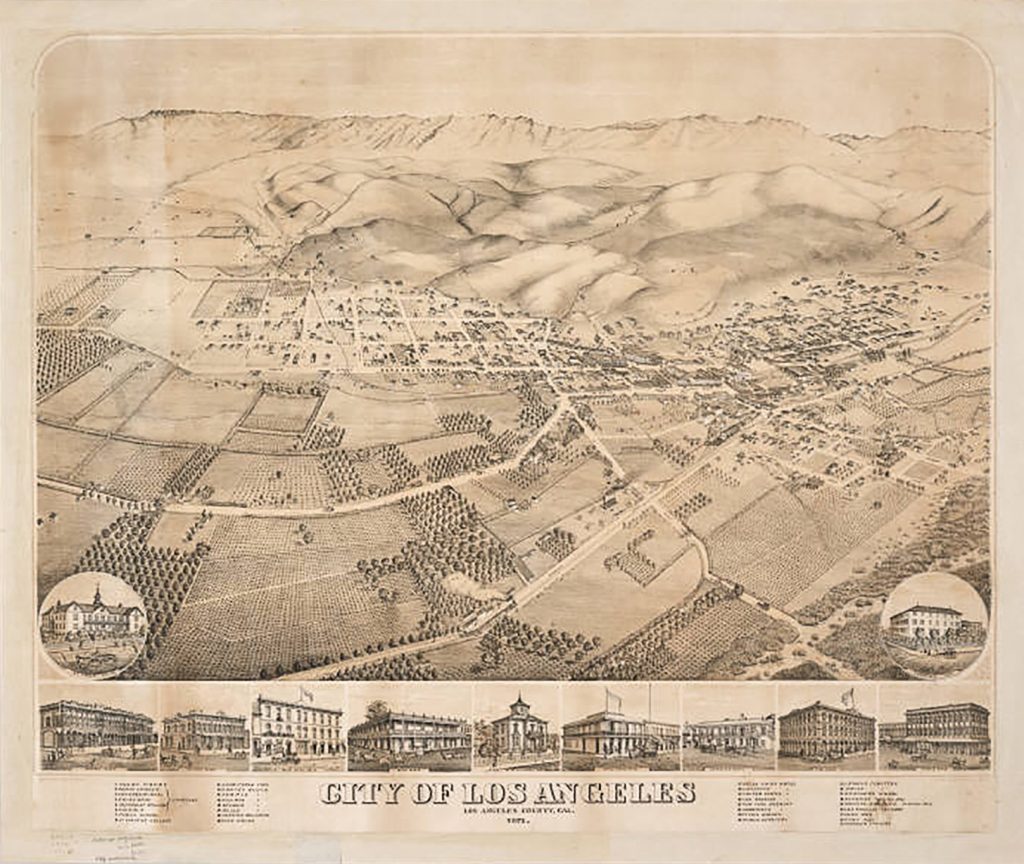 22 May Exhibition Titles Are Tricky: The Map and the Territory

Exhibition titles are tricky things: they need to convey a sense of what viewers will see quickly, accurately, and—ideally—with some memorable phrasing. As we developed the exhibition that we now call The Map and the Territory: 100 Years of Collecting at UCLA, the curatorial team from the Fowler, Hammer, and the UCLA Library considered a number of different titles. Some emerged from brainstorming sessions, others dropped into conversations after an “aha!” moment. But none of them quite captured the complexity of how much content—in terms of collections, ideas, and histories—we were attempting to represent in the exhibition. In the course of planning, we had asked the stewards and curators of various collections across campus to consider their holdings from a variety of perspectives: first things, oldest ones, most important. After that we asked them to propose about 10 themes and objects that would fit under those rubrics. Going over those options, we started to see a pattern that had to do with place. This led us to the three main sections for the exhibition: Borders and Boundaries, Home and the Built Environment, and The Beyond. It was the Fowler’s Director of Exhibitions, Sebastian Clough, who proposed The Map and the Territory as a title for these disparate groupings, a couplet that denotes some very specific references, but also connotes a broad range of possibilities. Ultimately, we came to see The Map and the Territory as an evocation of the intellectual and physical work of collecting, showing both its promise and limitations, and allowing us to explore the creative space between the two.

Perspectives and musing on the relationship between the map and the territory can be found in fields as diverse as literature, mathematics, economics, and post-structural theory. Argentinian author Jorge Luis Borges pondered this dichotomy in his 1946 short story, “On Exactitude in Science.” In less than 150 words, he created the fictional history of an empire obsessed with maps—so much so that its cartographers eventually created a map exactly the same size as its territory. But this scale rendered this map useless, and people abandoned it. It’s a tantalizing impossibility: to so perfectly document a thing as to create its exact replica. Maps strive to include as much information as possible to be useful; but they must also exclude data to stay legible, and in so doing cease to be perfectly accurate representations.

Like maps, collections document and represent knowledge through aggregations of objects. Many of these accumulations are created to evoke a whole: to showcase an artist’s body of work, chronicle activities that happened in a particular place and time, provide a comprehensive overview of a certain kind of object, or support the definition of an animal species. For us, The Map and the Territory encapsulated how collections attempt to create or record knowledge, while recognizing their inevitable incompleteness. The exhibition does not include objects from every campus collection—it can’t because a list of all the objects gathered by the university over the past 100 years does not even exist, nor would it be feasible to display all of them in one place. But in their quantity and quality, the UCLA collections offer limitless possibilities of exploration and imagination, and this exhibition invites viewers to embark on this journey.

This is a diseño, or sketch map, of the Rancho de San Jose de Buenos Ayres, a portion of which would eventually become the campus of the University of California in Los Angeles. This document and others like it were key to granting land and assigning property rights in Alta California as political alignments shifted from the Spanish to the Mexican to the United States governments over the course of two centuries. At the same time, these land grants served to displace the Indigenous peoples of California from their ancestral lands. The history of this campus is thus inextricably linked to that dispossession.

Italian painter and printmaker Jacopo de’ Barbari created this bird’s-eye view of Venice before the advent of aircraft. He likely produced this spectacular vista by making drawings from atop some 100 bell towers of Venice and assembling those sketches into a single design. A landmark in the history of printmaking, the final work was unprecedented in its scale, and one of the first topographically correct plans of an individual city. Only a dozen prints from the original edition are known to survive.

Bird’s-eye views of cities emerged as a characteristic form of cartography in the late 19th century. They were often used by individual towns as a form of civic boosterism, promoting distinctive buildings and other features of city life. Koch, a German immigrant to the United States, made several such views of cities and towns in Midwestern and Western states.