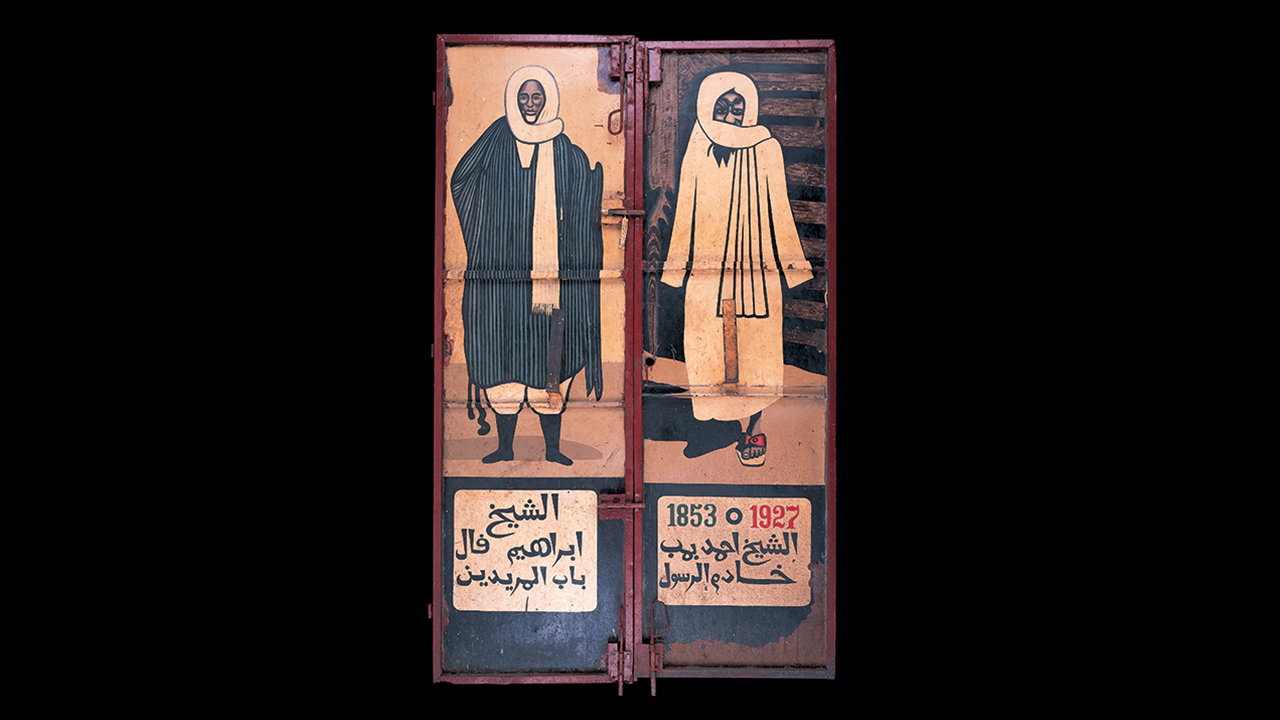 Join us for a timely and stimulating conversation inflected by different viewpoints on Sheikh Amadou Bamba as a spiritual leader who remains relevant today for those who call for religious freedom, peace, and social and economic opportunities around the globe.

On the streets of Senegal’s capital Dakar, the image of Sheikh Amadou Bamba Mbacké can be found nearly everywhere: blessing small businesses, protecting homes and vehicles, sanctifying places of prayer, and edifying those at work. A saint who sought to perfect his soul through poetic “sciences of the heart,” Sheikh Bamba (1853–1927), together with his most ardent disciple Sheikh Ibra Fall, founded Tariqa Muridiyya, an Islamic Sufi brotherhood.

As an enormously popular religious figure, Sheikh Bamba opposed colonial oppression in West Africa through nonviolent resistance; he also produced a vast body of works emphasizing spiritual development, charity, peaceful coexistence, and humility. The Muridiyya, one of several Sufi movements in Senegal, with millions of followers and an influential global diaspora, is especially important to contemporary thought leaders, for it is linked to issues of postcolonial identity, civic responsibility, and healing mysticism.

Youssef Carter is an assistant professor of Religious Studies and Kenan Rifai Fellow in Islamic Studies at the University of North Carolina-Chapel Hill. He is currently writing a book The Vast Oceans: Remembering God and Self on the Mustafawi Sufi Path and is a contributing editor for the Journal of Africana Religions and Transforming Anthropology.

Amy Landau is director of education and interpretation at the Fowler Museum at UCLA, where she oversees programs, educational initiatives, and gallery interpretation, and co-leads the Fowler initiative “Engaging Lived Religion in the 21st Century Museum.” Landau is also director of “Art, Religion and Cities” at Morgan State University, which she co-founded in 2018. Landau previously served as director of curatorial affairs and curator of Islamic and South & Southeast Asian art at the Walters Art Museum (2009-18). In 2017, she was a fellow at the Center for Curatorial Leadership

Angelica Lindsey-Ali, aka The Village Auntie™️, is an educator, author, researcher, and an authority on intimacy cultivation and emotional well-being. Lindsey-Ali’s work is informed by her 20+ years of experience in women’s wellness and her clinical, cultural, and religious training. She has a global following of over 50,000 women and has facilitated over 100 workshops for Muslim girls and women on traditional approaches to spirituality, love, intimacy, relationships, sexuality, and feminine gender identity within African frameworks.

Mustafa Okon-Briggs rose to international acclaim for his “Beyond Bilal: Black History in Islam” lecture series presented at over 30 universities across three continents, including at Oxford, Cambridge, Harvard, and Yale. In this series, he has explored the deep-rooted relationship between Islam and Black History; the legacy of contemporary African Islamic scholarship and its role in the international relations in the Muslim world; and the vital role female scholarship plays in the West African Islamic tradition. Okon-Briggs has been featured on international media, such as AlJazeera and Islam Channel.

Rudolph T. Ware III is professor of history at University of California Santa Barbara, specializing in premodern West African history. He formerly taught at the University of Michigan and before then at Northwestern University. His research interests include Islam, popular religious culture, and race. His work aims to confront and dispel Western misconceptions about Islam. Ware received his PhD in history in 2004 from the University of Pennsylvania. He is the author of The Walking Quran, Islam in West Africa and of Jihad of the Pen: The Sufi Literature of West Africa.