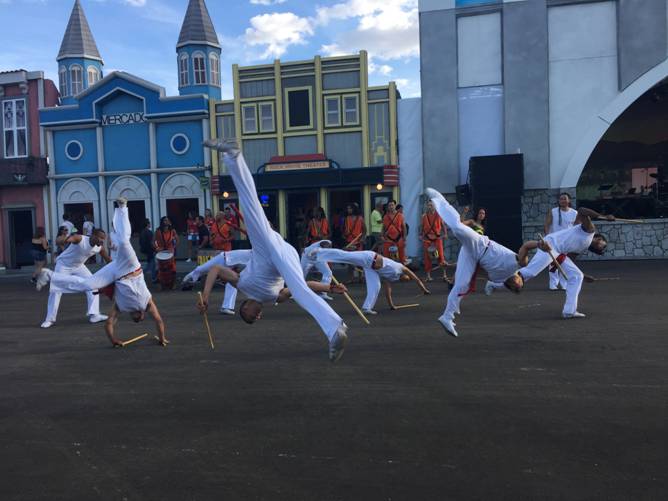 CANCELLED: Fowler on the Town: Bahia Through the Senses

THIS EVENT HAS BEEN CANCELLED

Spend an afternoon with the Capoeira Batuque Academy for a demonstration and participatory workshop that teaches basic movements of capoeira, a fascinating and magnetic blend of dance, combat, and ritual performance. Mestre Amen Santo will lead three workshops sequentially: Capoeira, Maculele, and Afro-Brazilian dance concluding with a ‘Samba de Roda’ to close the night with positive energy and movement. Afterwards, taste an Afro-Brazilian acarajé (fritter) provided by Sabor da Bahia. No experience necessary. Geared for ages 13 and up.

Capoeira
Capoeira is an Afro-Brazilian martial art combining movement, music, and acrobatics that was developed mainly by people of Angolan descent in Brasil in the 16th century. In this workshop guests will learn the most fundamental movements of Capoeira, and move to Capoeira Music as Mestre Amen takes the guests through various drills and exercises that incorporate every aspect of the martial art.

Maculele
Maculele is an Afro-Brazilian dance using wooden sticks that originated in Bahia, Brazil on the sugar-cane plantations during the period of slavery. In this workshop, guests will each wield a pair of sticks and follow Mestre Amen’s movements to learn the fundamentals of the Maculele dance. Maculele and Capoeira are interconnected in the Afro-Brazilian tradition.

Afro-Brazilian Dance
In this workshop, Mestre Amen will take guests through a movement exploration of the Orixas, Afro-Brazilan deities. This workshop will be accompanied by live music, specifically the drumming rhythms of Candomblé.


Axé Bahia: The Power of Art in an Afro-Brazilian Metropolis, explores the distinctive cultural role of the city of Salvador, the coastal capital of the Brazilian state of Bahia and an internationally renowned center of Afro-Brazilian culture. Featuring more than 100 works from the mid-20th century to the present, including a stunning array of sculpture, painting, photography, video, and installation art, the exhibition explores the complexities of race and cultural affiliation in Brazil, and the provoca­tive ways in which artists have experienced and responded creatively to prevailing realities of Afro-Brazilian identity in Bahia.