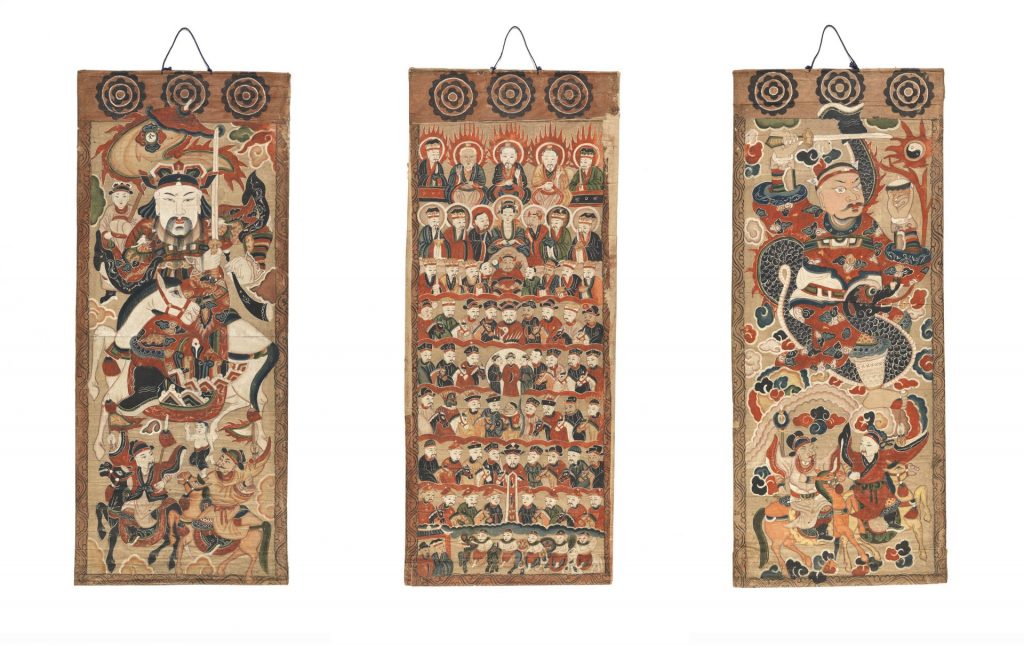 21 May Curator’s Choice: How to Make the Universe Right

In the summer of 2017, the Fowler presented How to Make the Universe Right, an exhibition of rare religious scrolls, ceremonial clothing, and ritual objects of the Yao, Tày, Sán Dìu, Sán Chay, and other peoples of northern Vietnam, southern China, and nearby regions. These groups originally lived in the southwestern and southern provinces of China and began to migrate to the mountainous regions of northern Vietnam several hundred years ago. Each brought along its own methods of educating and initiating priests and shamans. These religious practitioners serve as intermediaries between the physical and spiritual worlds, between the community and deities, striving to make the universe right. This task is accomplished through healing, balancing the forces of nature, and communicating with ancestors.

The artworks offer highly detailed, symbolic representations of a sophisticated pantheon of Daoist deities and their heavenly realms. They are essential for invoking spirits during ceremonies and transmitting knowledge between generations. Newly ordained priests and shamans must acquire a three-scroll set that always includes the same figures hung in the same order. The scroll sets are among the central tools the priests use to invoke the deities when conducting ceremonies. The High Constable (Tai Wai), at left, is the commanding officer of the spirit soldiers who guard and strengthen priests. He is also a protector of human life and symbolically connected to the Palace of Life, where all new souls are registered. The Administration (Heng Fai), in the center, depicts the entire pantheon of Daoist deities in the Palace of Human Destiny. The God of the Sea (Minor Hoi Fan), at right, is the special deity of priests in training. He guides new initiates as they learn, bestowing powers upon them.

How to Make the Universe Right was based on the curatorial work of Trian Nguyen, Associate Professor of Art and Visual Culture and the Luce Junior Professor of Asian Studies at Bates College.

All works in this exhibition are part of the Barry and Jill Kitnick Collection generously donated by the Kitnicks to the Fowler Museum at UCLA in 2015.