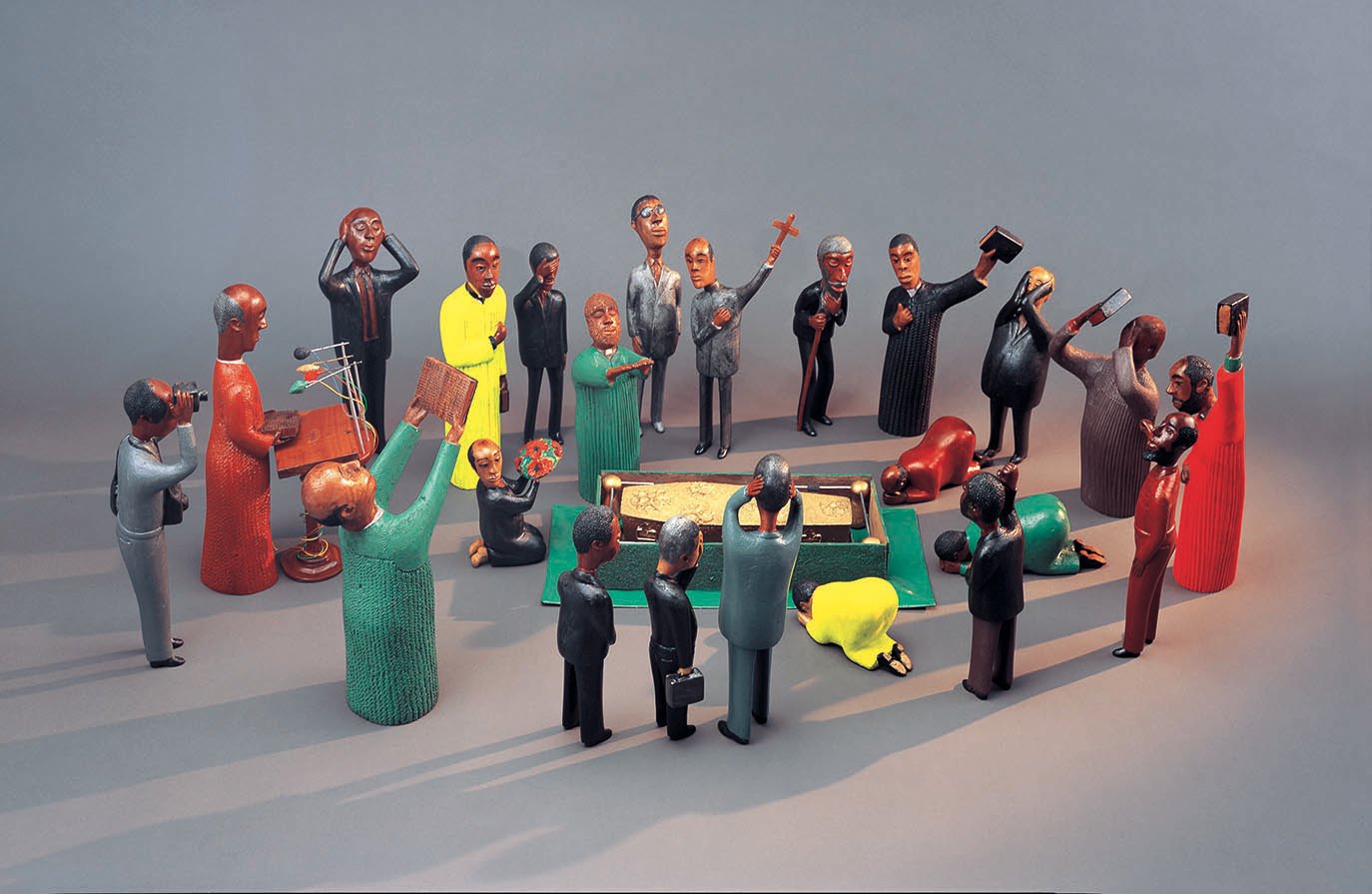 After decades of disenfranchisement, oppression, and protests, on April 27th, 1994, South Africans went to the polls to vote in their first free and fair elections. Approximately 20 million people cast the ballot; for 16 million of them it was the first time they were eligible to do so. This momentous event marked the end of the apartheid regime’s white minority rule over the country and the beginning of Nelson Mandela’s tenure as the first democratically elected President of South Africa. These seismic social and political transformations inspired Johannes Segogela’s Apartheid’s Funeral.

Johannes Segogela (South Africa, b. 1936) became a full-time artist in the 1980s, when dissent against white minority rule and the apartheid regime was brutally suppressed. A devout Christian, he used religious imagery to produce veiled critiques of apartheid policies, with depictions of the devil frequently standing in for the government. As the end of minority rule drew closer, Segogela was able to create overtly critical works, such as Apartheid’s Funeral, without fear of reprisal.

Made in anticipation of the 1994 vote, the sculptural installation brought together the architects of apartheid and those who fought against it. Figures from both sides assemble around a coffin and watch as the books and documents of the regime are being buried in the ground. According to the artist, the mourners include the founder of apartheid (the old man with a cane), its chairman (the figure with hands on top of his head), and secretary (the one with his hands over his ears). Members of Nelson Mandela’s political party, the African National Congress (ANC), hold up bibles, crosses, and briefcases, and clutch their fists as they witness the end of the oppressive era.

When Segogela carved this work, Mandela’s win was not a foregone conclusion. Though he was projected to easily gain a majority of the votes, fears of voter intimidation and violence that could suppress turnout remained. Thankfully, those fears were not realized and the ANC easily carried the vote in what proved to be a national rebuke of institutionalized racism. The writings of apartheid were laid to rest in the coming years, as Segogela had hoped, and Mandela’s government drafted a new, nondiscriminatory constitution to cement the nascent societal and political changes. And yet, Segogela’s work, though jubilant, also hints at the commensurate mourning: in the immediate post-apartheid period, the nation still had to come to terms with its history, for the political shift did not put an end to the grieving for all who had suffered and died in the struggle for freedom and equality. Still, the 1994 election was a testament to South Africa’s hopes for a better future and an affirmation of equality and justice for all its citizens.