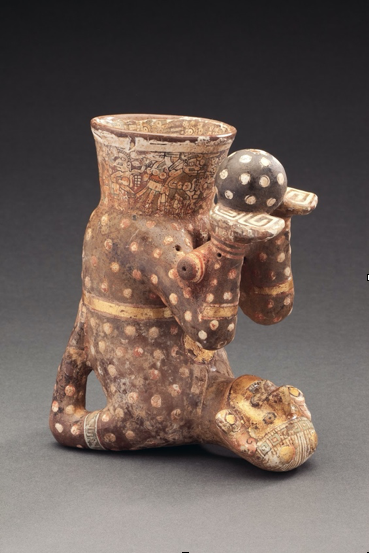 22 May Curator’s Choice: An Acrobat of Ancient Mexico

Acrobats and body contortionists have been popular in different cultures around the world from antiquity to today. This vessel’s iconography reflects a specific time and place. The precisely delineated processional figures depicted around the vessel’s opening; the use of such motifs as the stepped fret, known as the xicalcoliuhqui; and the application of delicate materials like gold leaf and “Maya blue” (a special pigment noted for its durability) all indicate that this object emerged from the Nahua-Mixteca tradition. In its heyday in the 13th–15th centuries, it encompassed a cosmopolitan set of cultural practices, material forms, and visual imagery shared by elites across central Mexico and other parts of Mesoamerica.

The acrobat recalls a vibrant historic period. Courts of the Nahua-Mixteca celebrated political and economic alliances—as well as military victories and conquests—with elaborate feasts marked by the consumption of tamales, deer and bird meat, and drinks made from cacao and maguey. During these gatherings, scribes and artists retold sacred narratives, connecting divine events of the past with the political legitimacy of historical figures of the day. They used what the Mixtec of the 16th century called ñee ñuhu sanaha, or “ancient books”—screen-fold manuscripts made of animal skins coated with a thin layer of gesso and painted in bright, gem-like colors. These books may even have been placed on view. In one of these documents, known today as the Codex Vindobonensis Mexicanus I, or the Codex Vienna for its present location, the hero and deity Lord Nine Wind raises the sky and water above the earth, revealing the landscape and the places within it. One of these places (visible on f. 44) is a temple enclosure with an acrobat in exactly the same posture as the one on the Fowler vessel. A container of this kind, perhaps created as tribute or a gift for a visiting dignitary, would have been highly prized and could have been displayed during a specific acrobatic performance. As happened at courts in other times and places, acrobats and jesters may have been able to poke fun at the ruling class—how else to interpret the gesture of drinking from the figure’s rear end?

Many of these courtly traditions were brought to a violent end by the Spanish invasion in the 16th century. The Spanish destroyed countless codices and precious objects, but local scribes persisted in documenting native histories in old and new forms. When Hernan Cortes made a return trip to Spain in 1529, he brought with him a group of Nahua nobles and performers, many from the fiercely independent kingdom of Tlaxcala. Christopher Weiditz, a German artist who visited Spain at that time, drew many of these individuals, including an acrobat manipulating a wooden log, similar to the figure on the Fowler vessel who holds a cylinder with his legs.