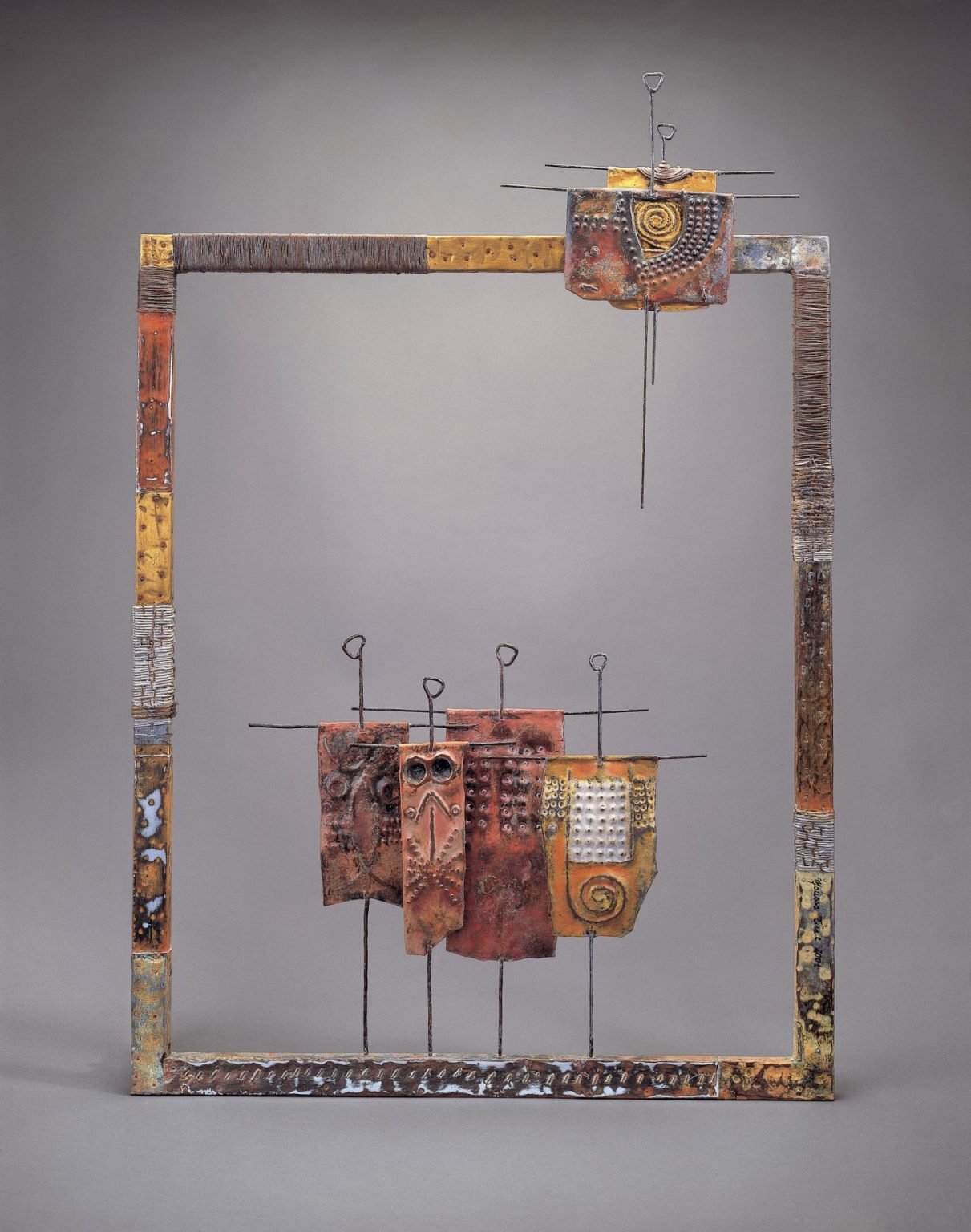 This sculptural “painting” by the contemporary Senegalese artist Moussa Tine (b. 1953) was featured in the Fowler’s 2003 acclaimed exhibition, A Saint in the City: Sufi Arts of Urban Senegal, co-curated by Mary Nooter Roberts and Allen F. Roberts. Tine’s work epitomizes the creative adaptation of the precepts at the heart of the Mouride Way, a Sufi movement in Senegal centered on the life and words of Sheikh Amadou Bamba (1853-1927). The Muslim mystic was revered for his teachings on pacifism and the dignity and sanctity of work. To secure his blessings, his image abounds on the streets of Dakar along with those of his “apostles of hard work”—members of the Baye Fall brotherhood.

The Baye Falls are represented in Tine’s openwork painting, part of his Elevations series: the apostles—two of them floating past the upper register—wear their characteristic multicolored clothing. They are fashioned from the metal of automobile mufflers, a material chosen by the artist for its tough yet pliable properties; and because its artistic transformation signifies the righteousness of resilience and hard work associated with Bamba and his disciples. Tine has said, “I look for metal in my environment and this is why it takes a long time to make these works.” His labor is evident in the elegantly hammered textures of the Baye Falls’ robes; and on the frame with its bands of finely wrapped wire and metal perforated with nails. The artist’s creativity and resourcefulness are an expression of his joy in his Sufi faith.

Devoid of a background and meant to be hung several inches from the wall, Tine’s figures cast shadows because, in his words:

As we approach the new year and this time for renewal, we honor those who have spent much of 2020 doing the hard work of healing the sick, feeding the needy, keeping us safe, and sustaining our faith in human dignity, honor, and justice. We remember the beautiful teachings of Shiekh Amadou Bamba and pray for a future of light and life.

This text draws from the Fowler publication, A Saint in the City: Sufi Arts of Urban Senegal, by Allen F. Roberts and Mary Nooter Roberts with Gassia Armenian and Ousmane Gueye, 2003, pp. 202-207. The late Mary Nooter Roberts was the Fowler’s Deputy Director and Chief Curator until 2009 and Allen F. Roberts is Distinguished Professor of World Arts and Cultures/Dance.