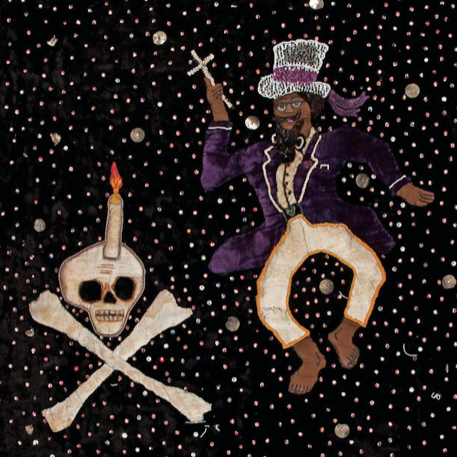 22 May Curator’s Choice: A Vodou Drapo for Papa Gede

Papa Gede, a Haitian Vodou divinity (lwa) associated with death and resurrection, practically dances off the bead- and sequin-spangled ritual banner (drapo) dedicated to him. A beloved ancestral figure understood to be the first man who experienced death, he welcomes offspring whose own flesh and blood has left them no choice but to follow Papa’s path to the other side. While skulls and bones anchor the dead to earthly realms, souls are expected to reach for a place well beyond. With a cross held firmly in his right hand, a mourner’s sash flowing from his top hat, and the tails of his undertaker’s coat trailing behind him, Gede joyously performs his theological duty as a psychopomp tasked with bringing the spirits of the newly deceased to Ginen, the ever-growing domain of ancestors.

The most celebrated genre of Vodou sacred arts, Vodou drapo reflect the creative impulse of this religion and the process of cultural synthesis from which it emerges. Skilled flag makers brilliantly combine and juxtapose African-derived concepts and symbols with those hailing from Europe and the Americas, creating a mosaic of ritual arts. Once little-known outside of Haiti, drapo have become popular commodities on the international art market and now grace the walls of museums, art galleries, and private homes throughout the world. While the creator of the Papa Gede banner remains unknown to us, contemporary Haitian sequin artists such as Evelyn Alcide, Rudy Azor, Clotaire Bazile, Myrlande Constant, Mireille Delice, Silva Joseph, Antoine Oleyant, and Yves Telemak have achieved wide acclaim.

Most Vodou temples or societies possess at least two flags (drapo sèvis), which represent both their congregation and the divinities they worship. Although they are often beautiful works of art, drapo are important within Vodou primarily because they are powerful liturgical objects. When utilized in rituals, these banners exemplify not only the transcendent beauty of the lwa, but also their active presence. Thus, drapo rank among the most sacred and expensive ritual implements in the temple, and their presence is essential in most Vodou rites, including initiation, invocation of the lwa, and pilgrimage.

Papa Gede is but one of a family of lwa, collectively referred to as the Gedes. In Vodou theology, Death is neither a solitary figure nor a one-dimensional presence. Rather, the march from life to afterlife involves a procession of Gede lwa whose individual characteristics and roles address distinct spiritual and cultural aspects of that inevitable journey. Bawon Samdi, who may be viewed as Papa Gede’s alter-ego, serves as the chief of the Gede clan. Bawon Samdi’s wife Grann Brijit is Death in feminine form. Bawon Lakwa protects the cemetery grounds. The lineage is extensive and the work is never done. For these reasons, banners honoring and invoking Papa Gede and his relatives rank among the most popular and commonly needed Vodou drapo.

Learn more about this object and watch our Lunch & Learn program last week that focused on this remarkable Haitian Vodou ritual banner dedicated to Papa Gede:

LUNCH & LEARN: DANCING WITH DEATH WITH PATRICK A. POLK