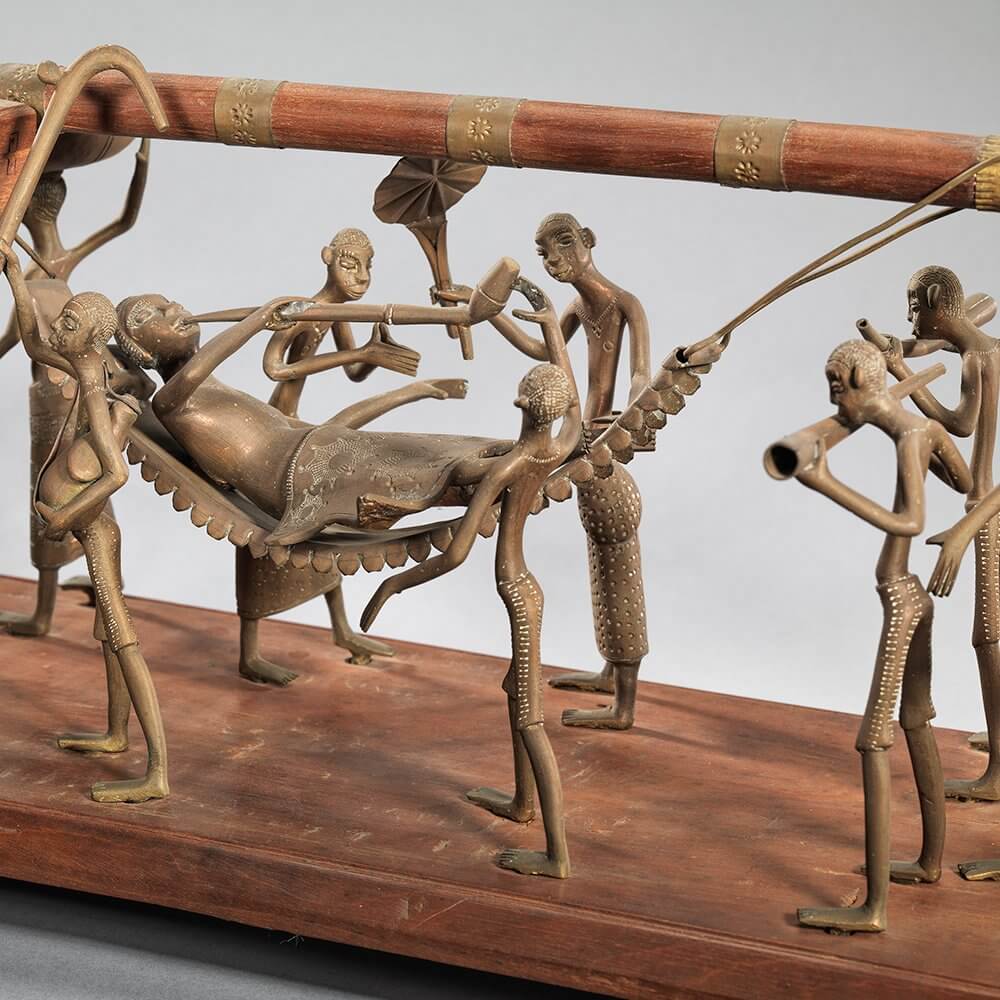 21 May Behind the Scenes: Innovative Forms on the Move

This remarkable tableau includes 22 cast copper alloy figures attached to a wooden base. They depict a dynamic procession of musicians and attendants accompanying a central figure carried in a hammock-like litter. We know little about the artist who created this object, but the style and composition of the figures indicate that it was likely made by an artist living in Abomey, the capital of the Dahomey kingdom, in what is today the Republic of Benin. The procession was made prior to 1931, when it was sold to Sir Henry Wellcome at a Messrs. Foster auction in London.

This type of object belongs to a genre that seems to have been created in the early 20th century. In 1950, the anthropologist Justine Cordwell collected oral histories from metalworkers in the royal guilds of the Abomey court, including Felicien, who was then the guild’s chef du quartier and spoke of his father, an artist named Gnassounou (Cordwell 1979, 487–88). Gnassounou was part of the Hountondji guild (which specialized in blacksmithing and work with precious metals) and trained in both techniques of repoussé and casting. Felicien reported that Gnassounou used his casting skills to innovate and create small, polished brass figures—likely similar to those on the tableau. Gnassounou showed them to a French colonial official and, though the circumstances are unclear, whether through force or invitation, Gnassounou ended up traveling to France as a representative of Dahomey for the 1906 Exposition Coloniale in Marseilles (Cordwell 488, Blier, 110).

Gnassounou remained in France for three years, spending some time studying art before returning to Benin in 1909 (Cordwell, 487–91). The cast figures he created at the colonial exhibition seem to have immediately gained popularity in France as well as back in Abomey. Émile Merwart, colonial governor of Dahomey from 1911–12, collected several brass figures, which were later exhibited in the 1922 Exposition Coloniale in Marseilles. (L’exposition, 21, 25) The catalog mentions Gnassounou (Niassounou) by name and identifies the works as recent innovations.

It seems that Gnassounou’s new cast figures were also widely adopted and later incorporated into other artforms. In particular, the copper alloy figures were included in asen, a type of portable altar used by many cultural groups in present-day Ghana, Togo, Benin, and Nigeria. Asen typically feature forged iron figures, but as art historian Suzanne Blier identifies, following Gnassounou’s invention, the altars also included the cast copper alloy figures (Blier 2018, 110). This asen from the Fowler’s collection shows similar cast figures secured atop of a circular base made from sheet iron and decorated with elements made from hammered copper alloy sheets.

Comparable cast copper alloy processional tableaux and asen with cast figures appear in collections across Europe and the United States (see below for some sample links). They date from the early 20th century to the present and offer opportunities to compare artists’ hands (via differences in figures’ style and posture) and to consider how artists have adapted and modified this genre over time.

Carlee S. Forbes is the Andrew W. Mellon Curatorial Fellow at the Fowler Museum at UCLA

This research is part of a multi-year, interdisciplinary research project generously funded by the Andrew W. Mellon Foundation. A collaboration between curators and conservators, it seeks to explore avenues of research within the Fowler’s Sir Henry Wellcome Collection and to understand the objects’ materiality, original ethnographic context, exhibition history, and provenance. We have previously featured our research on beads and gold weights. Follow the Fowler’s Instagram (@FowlerMuseum) and the hashtag #WellcomeWednesdays for more updates on this project.

To see examples from other collections: