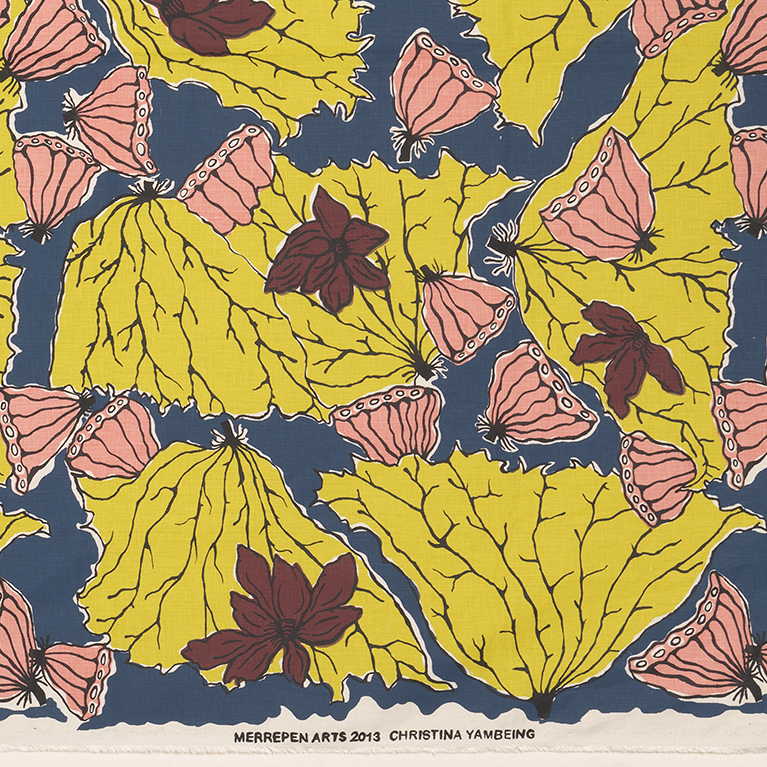 While many Indigenous peoples live and work in small and isolated communities, the traditions that sustain them are vibrant and evolving. Over the past 50 years—a short span by Aboriginal reckoning—artists in some of these locations came to express their ancestral stories and connections to their land through screen-printed textiles.

Joanna Barrkman, Senior Curator of Southeast Asian and Pacific Arts and curator of this exhibition, is focusing on five Aboriginal art and cultural centers where screen-printed textiles have become a vital form of creativity and economic sustainability. Each art center has its own story—told in a major publication accompanying the exhibition—and artists producing unique designs. Some of their printed textiles are made for local use, as clothing and decorations for community spaces. Others have been sought out by fashion and interior designers for couture collections and architectural spaces.

What is remarkable about these striking artworks is that many of them are produced in challenging conditions that require a great deal of ingenuity, adaptability, and collaboration. Ground fabrics, inks, and printing equipment are shipped to Aboriginal art centers from cities in Australia’s south; some of the remote roads become inaccessible during the wet season, which can cut off communities for weeks. Equipment, such as heating ovens, is often improvised and repaired on the spot with minimal resources.

One of the contributions to the book—by Michelle Culpitt, Ingrid Johanson, and Kerin Riederer—has captured a day at Bábbarra Women’s Centre in Maningrida, West Arnhem Land, the largest Aboriginal community in the Northern Territory with a population of some 2,600 people who comprise more than 100 clan groups and speak more than 12 languages:

“On an average day, women from each corner of the community [come to] Bábbarra Women’s Centre, arriving on foot, in troop carriers, mini-buses, and clapped-out sedans covered in red dust. Grandmothers come with children in tow. Noses are wiped, last bites of breakfast swallowed, and kids are shooed off to school, a short walk away. Other women arrive to use the community laundry, retail store, or thrift shop… At the print table apron strings are tied and ink is slapped onto screens. Phones ring nearby, with relatives calling from across Arnhem Land and the central desert; washing dries; sewing machines hum; a garden hose bounces water against the mesh that removes wet ink from a recently printed screen… and women express story upon story at a place where songs recall land masses as they were 20,000 years ago—songs that are connected to designs on screens, printed on textile, and worn by people across the globe.”

The textiles that emerge are striking and evocative. They teach those of us who are not familiar with Aboriginal cultures about life “on country:” gathering foods, celebrating rites of passage, honoring ancestral spirits, maintaining traditional lands, and much more.

Take Kurlama (Yam ceremony) textile created by Daniel Munkara at Tiwi Design on Bathurst Island: Kurlama is the name of the “cheeky yam” as well as a Tiwi initiation ceremony for young men. The yam is dug up from the ground at the end of the annual wet season; the tuber is soaked in water for three days to leech the poison it contains before it can be cooked and eaten. The Kurlama ceremony coincides with the yam harvest. The artist depicts the tubers and the cadence of the ceremony in his textile.

Yawkyawk is a Kunwinjku word that means “female water spirit” or “young woman.” Likened to European mermaids, yawkyawk dwell in waterholes, rock pools, and billabongs that are often considered to be sacred sites. Yawkyawk occasionally appear or call out in the heat of the afternoon. As Deborah Wurrkidi, an artist at Bábbarra Women’s Centre, recalls:

“My grandmother told me a story that they heard those yawkyawk and when they looked out with their torch at night, all the women saw the yawkyawk tails flapping and disappearing in the water. The water is very cold in that billabong and the sand is soft, you might fall down there in the mud… Sometimes, when they are cold, the yawkyawk get out of the water to lie in the sun, but when they hear our [people’s] footsteps, they quickly jump back in.”

In artworks, such as this textile created by Sonia Namarnyilk at Bábbarra Women’s Centre, yawkyawk are depicted with scales, fish tails, and long hair mingled with trailing algae or water weeds.

This is just a brief glimpse at the world of Aboriginal artists and their creations. We look forward to sharing more of it with you when the exhibition opens (dates to be announced). To learn more, visit the Aboriginal Screen-Printed Textiles exhibition page.

Aboriginal Screen-Printed Textiles from Australia’s Top End is organized by the Fowler Museum at UCLA in collaboration with Tiwi Design, Jilamara Arts and Crafts, Injalak Arts and Crafts Aboriginal Corporation, Bábbarra Women’s Centre, and Merrepen Arts, Culture and Language. Major support is provided by the Martha and Avrum Bluming Exhibition Fund and the Australian Government through the Australia Council for the Arts, its arts funding and advisory body. Additional generous support comes from the Fowler Textile Council, the Anne and John Summerfield Fowler Museum Fund, the Anawalt Center for the Study of Regional Dress Fund, the Australian Consulate-General of Los Angeles, Mary Herne and David Kenin in memory of Barbara K. Herne, Andrew Adelson, and Connie McCreight and Kerry Smallwood. The accompanying publication has been generously funded by the R. L. Shep Endowment Fund at the Fowler Museum, along with a grant from the Ethnic Arts Council of Los Angeles (EAC). Educational programs are made possible by a grant from The Ralph M. Parsons Foundation and the EAC.