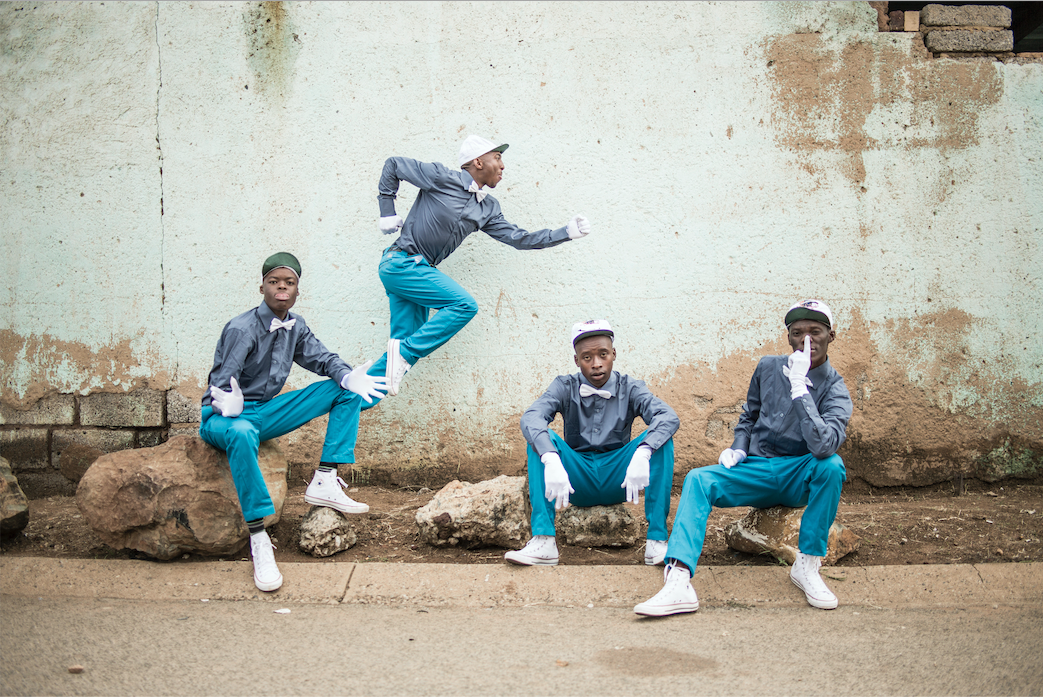 22 May A Look Back: Pantsula 4 LYF: Popular Dance and Fashion in Johannesburg

The sounds of pantsula echo throughout the townships of Johannesburg: kwaito and house music, coupled with whistles, are accompanied by the quick and complex rhythms of dancing feet. Crews, or troupes, of dancers—some exclusively male, others including women—perform virtually everywhere: on busy streets, in front of bars, and in quiet neighborhood squares, creating a township subculture that many view as a way of life. Pantsula informs the speech, dress, and movements of its participants. Though it has existed since the 1970s, a decade later it became a dominant youth culture of the townships. As a pursuit of the young, pantsula—which means “waddle like a duck,” in reference to elements of the dance and its dress—is a cultural movement that has evolved and changed, reflecting the lived experience of each generation that embraced it.

In the 1980s, during the final decade of the apartheid era, pantsula dances commented on life under a repressive regime, including the oppressive police presence and systemic poverty. This exhibition of photographs by Chris Saunders captured how pantsula choreography endured as a vital meditation on the everyday experiences of township life. Dances now reference favorite pastimes and daily occurrences, be they playing cards or catching a bus. Some movements simply highlight the virtuosity of the dancers. The apartheid-era dances, however, are still being performed, reminding participants of South Africa’s history and touching on themes, such as police presence, that remain important community concerns.

Although for most of its existence, pantsula has been relegated to the townships, recently it has begun to exert influence on the broader South African culture. Clothing brands that cater to pantsula are gaining popularity with a wider youth market; and since 2011, Red Bull, the energy drink company with a strong presence in the worlds of music, dance, and photography, has hosted a dance competition featuring pantsula alongside other hip-hop styles. With each year, the public profile of pantsula grows, transforming it from a subculture localized in the Johannesburg townships to a South African youth culture that speaks to the vibrancy of the country’s music, dance, and fashion.

Enjoy these photographs by Chris Saunders, which offer a look at different components of pantsula. Each generation has shifted the dance and its associated style to meet the changing tastes of the time. Today, pantsula maintains the historical investment in clean, crisp clothing, but also embraces American Dickies trousers, Converse All Star sneakers, and a cap with a small brim, such as a bucket or driving hat. Originally danced by solo performers, today’s pantsula emphasizes crews, with choreography focused on routines in which all the performers dance in unison, executing precise footwork and acrobatic moves.