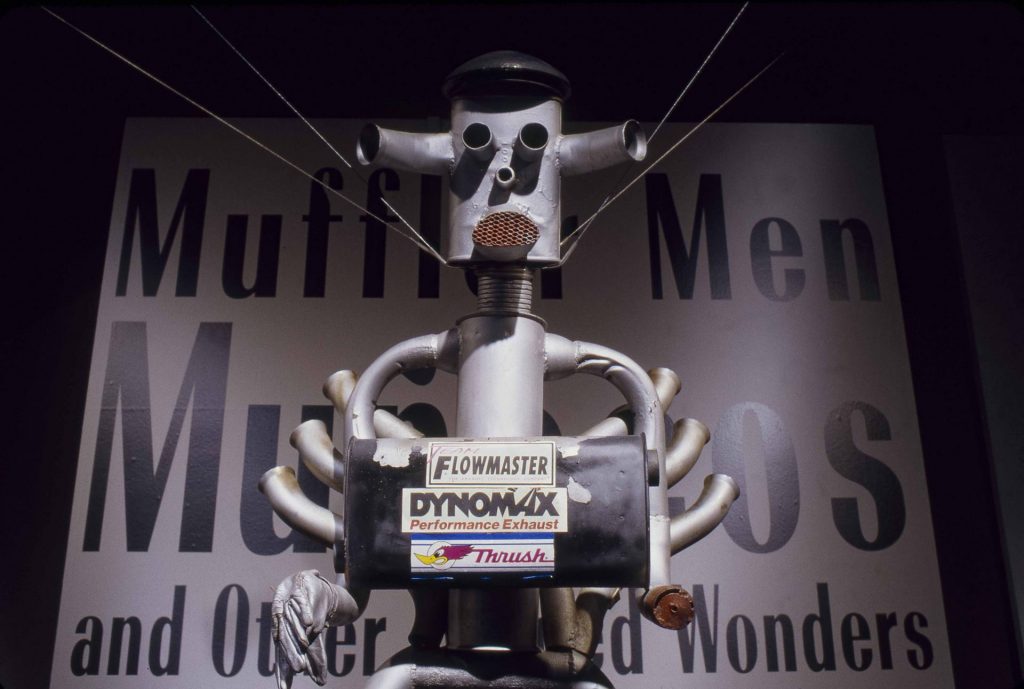 21 May A Look Back: Muffler Men, Muñecos and Other Welded Wonders: Folk Art from Automotive Debris

By Patrick A. Polk

Muffler sculpture! For anyone who has spent time driving around Los Angeles with me, hearing the sudden and generally unexpected shout of “Muffler sculpture!” is likely a familiar experience. Commonly referred to by their makers as “muffler men” in English and “muñecos” or “monos” in Spanish, these whimsical artworks are constructed from used automotive parts and other cast-off industrial materials. Fashioned by automobile mechanics, they appear in a wondrous array of forms, ranging from devils and dogs to cartoon characters and space aliens. Personally, I revel in their aesthetics and ingenuity as well as the variety of meanings they hold for makers and viewers alike. Thus, I find myself always scanning sidewalks for old favorites and new discoveries when I am out and about in the city. In short, the exhibition Muffler Men, Muñecos and Other Welded Wonders was a labor of love that grew out of countless hours spent exploring the streets of Southern California with my co-curator Timothy C. Correll, excitedly spotting sculptures and interviewing artists.

Products of creative free or down time at the workplace, muffler sculptures represent a widespread yet surprisingly unheralded genre of folk art. First and foremost, they serve as eye-catching forms of business signage that stand out from the visual clutter of the built landscape. In the words of shop owner Joe Loria, “The best attraction to the eye is the muffler man.” Designed to engage and provoke positive responses from passersby, these figures occasionally become local landmarks, as is the case with Loria’s eight-foot-tall Carson Muffler Robot. They likewise allow mechanics to personalize their workspaces with hand-made objects that demonstrate skill and creativity with the tools and materials of their trade. Gary Koppenhaver of G & R Muffler noted, “If we can do this on a muffler guy, we can probably do pretty good work on a car. And that’s what a lot of people say when they come in.” The sculptures also often reference the individual interests and experiences of their makers as well as collective ethnic, political, and religious identities. For these reasons and more, countless muffler men and muñecos await those seeking folk art in the City of Angels. 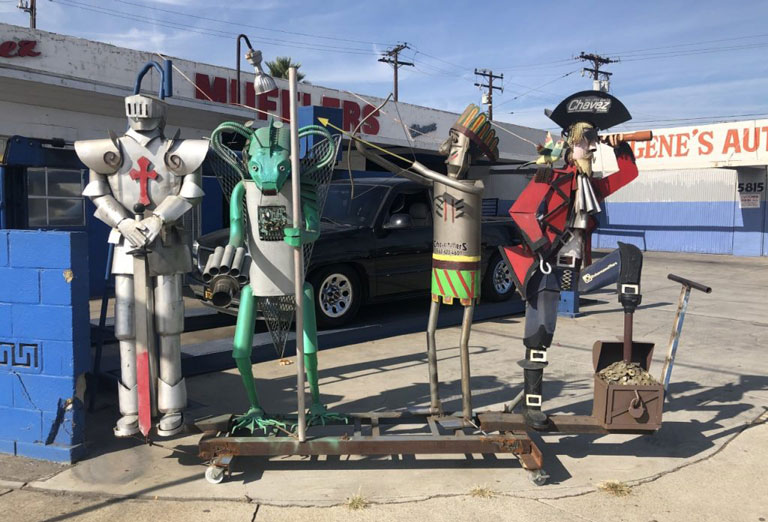