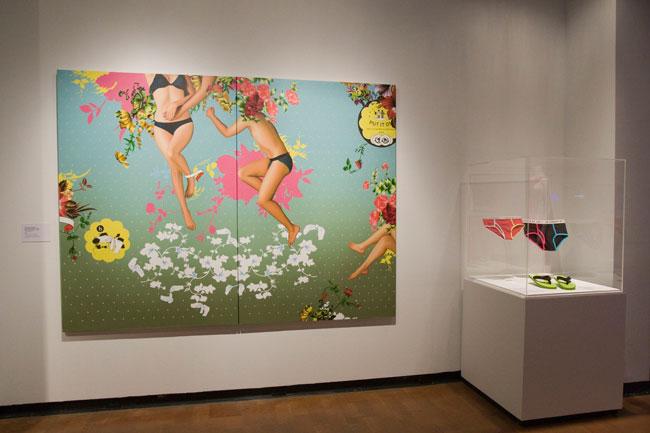 22 May A Look Back: Make Art/Stop AIDS

As coronavirus cases rise in California, we recall an exhibition that opened at the Fowler over a decade ago: Make Art/Stop AIDS (February 23–June 15, 2008), co-curated by David Gere and Robert Sember. At the Fowler, we have long sought to create opportunities for artists, activists, and our audiences to grapple with issues of key social importance. That exhibition reckoned with the catastrophic human losses inflicted by the HIV/AIDS pandemic. A look back on it is timely as we grapple with the current epidemic and the injustices it has made starkly apparent.

Make Art/Stop AIDS sought to dismantle the assumptions that AIDS was solely a medical crisis, and that it existed apart from most people’s daily lives and responsibilities. Artists from Brazil, India, South Africa, and the United States led museum visitors through the history of the epidemic, highlighting its impact and offering information and ideas about future interventions. They joined with activists, medical experts, and others to inspire, provoke, and guide the radical changes that were needed to combat that global crisis. Calls for human rights and social justice resonated throughout the exhibition. Approximately 60 artworks shone light on debates about the use of condoms and the ethical dilemmas facing societies in which some have access to life-saving treatments, while millions do not.

In the United States, during the first years of the epidemic, artists denounced the homophobic, sexist, and racist reactions of many people in power and helped to promote and disseminate information on safer sex and care for those affected. Embracing the idea of collective action, they joined in a broad coalition to decry drug profiteering and the failure of governments to ensure healthcare for all. Artist activists in Brazil echoed these calls, demanding that the state protect the rights of all its citizens, including the right to health. Emboldened by similar humanitarian principles, artists in South Africa responded to the epidemic by forging an AIDS social movement inspired by the anti-apartheid struggle; ironically, the fight for treatment pitted AIDS activists against a government built by anti-apartheid leaders. In India, artists continued to invent and promulgate vital prevention and education efforts, challenging deeply entrenched social norms and prejudices. While the contemporary art movement there was largely disinterested in AIDS—with notable exceptions—traditional artists positioned themselves at the forefront of AIDS education and awareness campaigns. In each of these cases, and elsewhere in the world, the AIDS crisis inspired artists to do what they do best: engage in radical acts of imagination through which freedom and justice can be advanced.

We invite you to re-visit the Fowler’s contribution to that conversation via a virtual walk-through and see the paintings, sculptures, photographs, performance videos, posters, animated shorts, digital media, and installations by artists David Wojnarowicz, Fiona Kirkwood, Daniel Goldstein, Jean Carlomusto, the collective Gran Fury, among many others.

The Fowler as a Site for Social Action

Many of the issues tackled by artists featured in Make Art/Stop AIDS are relevant again in the context of COVID-19: stigma and an alarming disparity in the allocation of resources across racial and ethnic lines are paramount now. Today’s medical and ethical crisis is defined by the disproportionate number of black and brown bodies afflicted by coronavirus disease; the senseless and brutal killings of black Americans at the hands of the police further augment these inequalities.

The Fowler is committed to playing an active role in addressing and redressing these issues through its exhibitions and public programming. We were proud to present Make Art/Stop AIDS, Break the Silence: Art and HIV/AIDS in South Africa (2002), Dress Up Against AIDS: Condom Couture by Adriana Bertini (2006-2007), and Through Positive Eyes (2019-20). Last week’s performance by artist-activist Patrisse Cullor, A Prayer for the Runner, in memory of Ahmaud Arbery, and Patrisse’s conversation with Professor Melina Abdullah continued our intent. As we move forward, we ask ourselves how we in the museum can support black lives and foreground the human rights of black Americans, be they affected by the COVID-19 epidemic, unjust policing, or other social plagues. Today, as we share this newsletter with you, we do not yet have the answers, but we are speaking with and learning from Los Angeles communities in order to do our part in this vital movement.