22 May A Look Back: Ernest Cole: Photographer

Ernest Cole: Photographer, presented at the Fowler Museum at UCLA from April 7–July 7, 2013, brought together 125 original, extremely rare, silver gelatin prints by one of South Africa’s first black photojournalists. Upon moving to the United States to publish his work, Cole received many offers to work for various magazines and newspapers. He declined, explaining that his photographs could not be made on a deadline, or cut for “lack of space.” Instead, he wanted them to be published in a book form, so as to retain his own “honesty and independence” and the works’ “universal and educational value.”

We all learn from one another and from those who preceded us, together with the heritage they left: knowledge, art, teaching and philosophy. No aware person can fail to realize the enormous debt he owes to those from whom he has learned. The only way of repaying this debt is to preserve that continuity which the African philosophers call the stream of life, and to add one’s contribution to the common fund. As a photographer to whom chance has given unusual opportunities, and deeply aware of the degree to which my own success is built upon the struggles of others, I wish to do this book in payment of my debt.

Excerpts from a letter to Thomas Cooney of the Ford Foundation requesting funding for Cole’s projects in the USA, A Study of the Negro Family in the Rural South and A Study of Negro Life in the City, which were intended to be produced in book form rather than on the commercial market or photojournalism. Neither project was completed.

Ernest Cole was born in 1940 in a black township just outside Pretoria, South Africa’s capital. He became fascinated with photography as a teenager. A family friend lent him an old-fashioned camera and Cole was able to earn money by producing portraits for his neighbors.

In 1958, Cole found work in Johannesburg as a darkroom assistant at Drum, South Africa’s premier magazine oriented toward an urban, middle-class, black readership; he used part of his salary to enroll in a distance-learning course offered by the New York Institute of Photography. Mingling with other talented young black South Africans in Johannesburg—journalists, musicians, political leaders—Cole began to think about photography as a means to contribute to the anti-apartheid struggle.

The world that Cole photographed was one defined by the laws and policies of apartheid, an Afrikaans word meaning “apartness.” Enforced through brutal legislation by the National Party government—the ruling party from 1948 to 1994—apartheid severely curtailed the rights of the majority black and other non-white inhabitants of South Africa, while maintaining white supremacy and Afrikaner minority rule. Cole’s photographs captured the heinous reality of institutional racism, a system that finally ended with the elections of 1994, following years of internal resistance, arms and trade embargoes, and international opposition.

Cole was inspired by the photo-essays of French photographer Henri Cartier-Bresson to produce a book of his own photographs telling the story of apartheid. He realized that it would have to be published outside of South Africa and left for New York in 1966. In 1967, Random House brought his project to fruition by publishing House of Bondage. Cole’s photographs caused an international sensation. Sadly, uprooted from his home and community, and divorced from the circumstances that had fired his creative imagination, Cole never found his footing in Europe or America. He died homeless in New York in 1990—one month after Nelson Mandela’s release from prison—having spent more than 23 years in painful exile, never returning to South Africa, and leaving no known negatives and few photographic prints.

“Handcuffed blacks were arrested for being in white areas illegally.”
—Ernest Cole, House of Bondage, 1967

According to musician Julian Bahula, Cole’s childhood friend, the apartheid law forbade photography of people being handcuffed by the police. 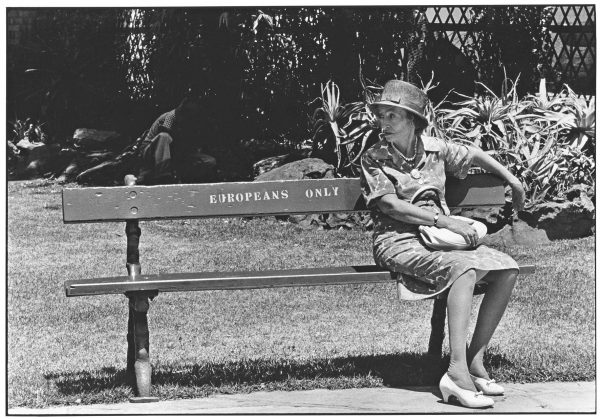 Johannesburg’s benches were reserved for whites and bore inscriptions stating as much. There were no “blacks only” benches in the city: blacks sat on the curbstones. 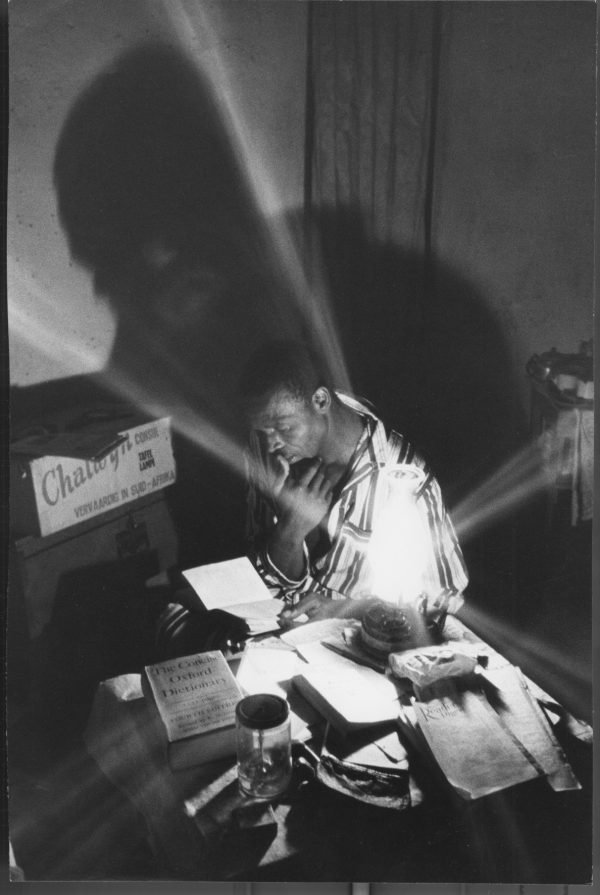 “Leonford Ganyile was hopeful for future and studied for his matriculation by the light of a paraffin lamp. He later escaped across Botswana border.”
—Caption to a similar image by Ernest Cole found in House of Bondage, 1967 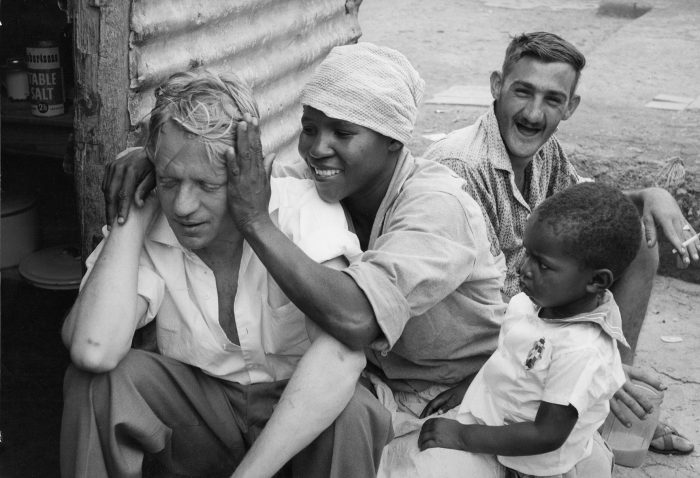 This image was almost certainly taken at a shebeen (unlicensed bar or club) in Pretoria’s Riverside neighborhood, just outside Eersterust. According to an article in the May 1962 issue of the magazine Drum, white people got on well with their “colored” and black neighbors; apartheid laws, however, forbade whites and blacks from drinking together. Similarly, interracial sex was strictly forbidden.

Presented in conjunction with Ernest Cole: Photographer, the exhibition Mandela for President: South Africa Votes for Democracy focused on the nation’s first free elections in 1994. Election ephemera and works of art in honor of this landmark event were shown in the Fowler in Focus gallery.

Taking photographs, listening to pirate radio, and making artworks about the government during the apartheid landed South Africans in jail. Artists began to create works featured in Mandela for President after the first democratic election in 1994. 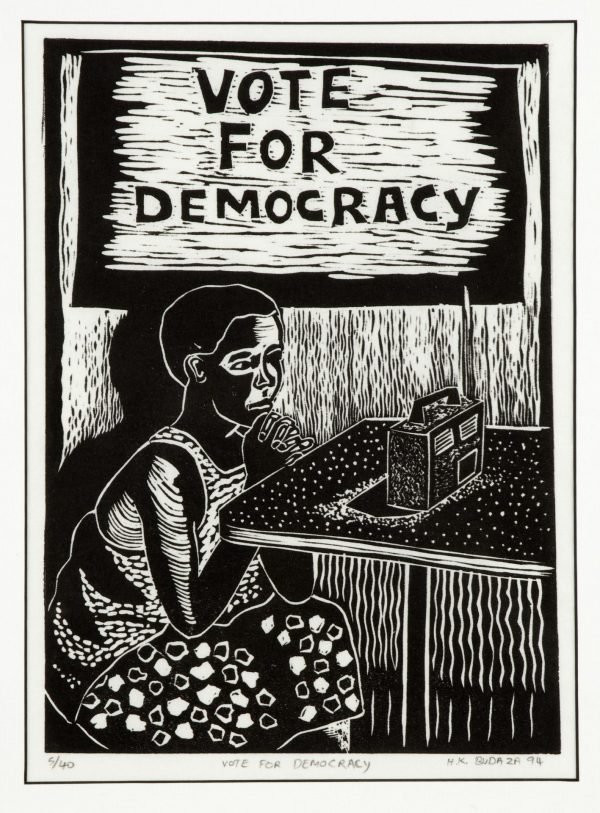 Budaza’s inclusion of a radio in his print recalled the importance of Radio Freedom, the underground radio station created in the 1960s for the African National Congress (ANC). Radio Freedom targeted the oppressed majority within South Africa, broadcasting daily at staggered times and frequencies from outside the country. Programming included poetry readings, interviews, dramatic performances, news, speeches, and music—selections of which played in the Fowler gallery during the exhibition. Listening to these broadcasts was forbidden by the South African government, and anyone caught doing so was subject to penalties as severe as eight years in prison. At the time of the 1994 election, it was still primarily the radio that carried the long-awaited news of Mandela’s victory.

Printed cloths featuring commemorative subject matter were produced in Europe and the United Kingdom in the first part of the 20th century. In Africa, such cloths were manufactured beginning in the 1960s. Throughout the African continent, commemorative cloths were worn to honor visiting dignitaries, support political campaigns and their slogans, and mark important civic events, such as deaths of revered community members or leaders. The candidacy of the ANC and Nelson Mandela generated a number of cloth designs that were either worn as wraps, or tailored into garments. The phrase Sekunjalo Ke Nako, incorporated into the design, may be translated as “Now is the Time.” Cape Town-based singer and songwriter John Pretorius wrote a song called Sekunjalo ke Nako, which he performed for 120,000 people gathered at a rally celebrating Mandela’s release from prison in 1990. The song was later included in Listen Up! The Official 2010 World Cup Album. 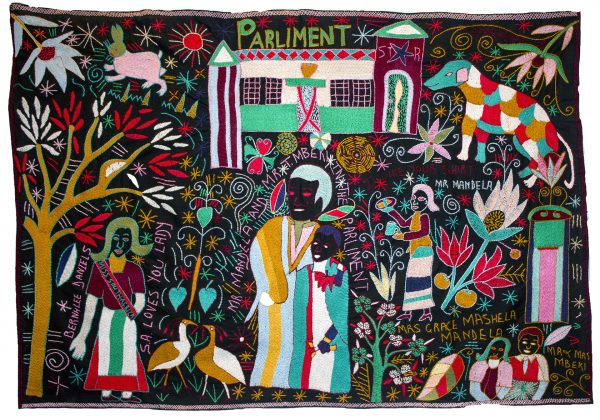 The Mapula Embroidery Project began in 1991 in an area known as the Winterveld, just north of South Africa’s capital, Pretoria. Prior to 1994, this region was part of the so-called “Homeland,” known as Bophuthatswana, and the project had been intended as a remedy for poverty that characterized this area, considered to be “outside” of South Africa. The project’s earliest works featured imagery drawn from books on the local flora and fauna. As the 1994 election approached, the embroiderers found inspiration in newspapers, posters, and brochures, and began to depict symbols of nationhood. The name of Bernhlee Daniels, Miss South Africa in 1995, appears on the cloth. 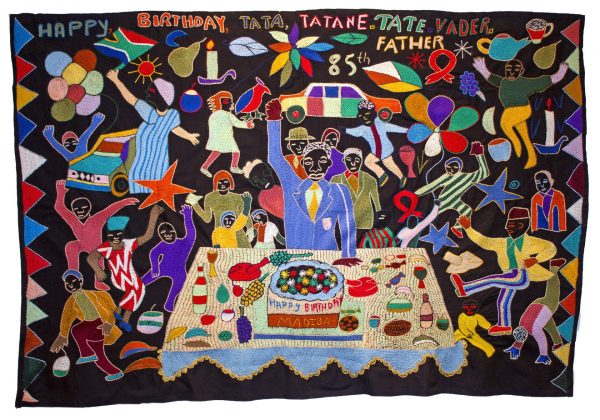